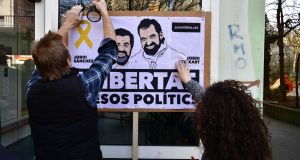 Spain’s judiciary has rejected a fourth consecutive attempt by pro-independence parties to get their favoured candidate voted in as president of Catalonia.

The Catalan parliament had scheduled an investiture vote for jailed activist Jordi Sànchez on Friday. However, on Thursday, supreme court judge Pablo Llarena rejected his request to be granted leave to attend the session, warning that there was a risk he would offend again which could lead to “serious consequences”. He also refused him permission to take part in it via video-link.

Mr Sànchez, who was jailed in October 2017 and is the former leader of the biggest rank-and-file pro-independence association, is awaiting trial for rebellion and sedition. In March, he made a similar request for leave, which the same court denied.

The independence movement presented him as candidate for a second time in the belief that international pressure would sway the supreme court into granting him leave, having filed a complaint with the United Nations Human Rights Commission over his imprisonment.

Since pro-independence parties won a majority in the Catalan parliament in a December election, the courts have also blocked a bid by the region’s exiled former leader, Carles Puigdemont, to return to the post. Another candidate, Jordi Turull, was jailed last month, the day before facing a second-round investiture vote.

Messrs Puigdemont, Turull and Sànchez are among 13 Catalan politicians charged with rebellion for their role in last autumn’s failed independence drive.

With the judiciary – and its accusations of rebellion – playing such a major role in the Catalan crisis, the question of whether or not the independence movement has used violence has come under scrutiny.

Last Thursday, a German court rejected Spain’s attempt to extradite Mr Puigdemont to face trial for rebellion, on the grounds that there was a lack of evidence he had used violence. This week, Spanish prosecutors have met with their counterparts in Germany as part of a bid to persuade the country’s judiciary to reconsider.

Mr Puigdemont could still be extradited on a less serious corruption charge related to his alleged use of public funds to stage last year’s controversial independence referendum.

However, the separatist movement’s relationship with violence has dominated much of the political debate recently.

On Tuesday, several suspected members of the so-called Committees for Defence of the Republic (CDR) activist groups were arrested for protests they have carried out against the Spanish state’s handling of the Catalan crisis.

The prosecutor in the case called for one detained woman to be charged with terrorism-related offences for her role in allegedly blocking roads and lifting up barriers at toll booths during the Easter holiday. However, on Thursday the judge released her and has only accused her of public disorder offences.

Interior minister Juan Ignacio Zoido compared the CDRs to the Committees for the Defence of the Revolution, which enforced the Castro regime’s values in Cuba. Fernando Martínez-Maillo, general co-ordinator of the governing PP, said that the Catalan groups’ actions have “plenty of similarities” with the politically charged street violence carried out by supporters of Basque terrorist group Eta, when it was active.

But pro-independence parties have closed ranks on the issue, insisting that such comparisons are inappropriate and are part of a strategy to tarnish the image of the secessionist movement and justify the charges of rebellion.

The parties and the CDRs themselves have underlined a commitment to peaceful methods.

“Lifting up toll-road barriers on the motorway, painting on signs or walls, that is not violence,” one member of a CDR from Tarragona, who did not want to be identified, told The Irish Times. “It might be from the point of view of Spain, which wants to criminalise us, but for us and the rest of the world this is not explicit violence.”