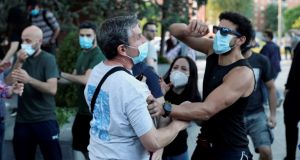 Protesters and counter-protesters clash during a march against the Spanish central government’s management of the coronavirus crisis in Madrid, Spain. Photograph: EPA/Rodrigo Jimenez

Spain’s prime minister Pedro Sánchez secured a crucial parliamentary victory this week, but his minority government has been left looking more fragile than ever as it faces the coronavirus crisis and its fallout.

On Wednesday, Spain’s congress narrowly voted in favour of the coalition government’s proposal to extend the state of emergency, the legal framework supervising the national lockdown, by another two weeks. The motion received 177 votes, with 162 against and 11 abstentions.

This was the fifth extension to the state of emergency that Mr Sánchez has managed to push through since March.

With nearly 28,000 dead from coronavirus, Spain has been the second-hardest hit country in mainland Europe, after Italy. But the virus has now apparently come under control, with daily deaths having regularly dropped below 100.

“It is the Spanish people who have stopped the virus and nobody has the right to waste what we have achieved with the lockdown,” Mr Sánchez said as he defended the continuation of the state of emergency.

But as Spain embarks on a complex and gradual lifting of its restrictions, Mr Sánchez’s political difficulties appear to be mounting.

Wednesday’s extension vote was the tightest of the five he has faced so far. Its approval was only possible due to last-minute negotiations with the Ciudadanos party, which supported the motion on the condition that the extension would be only two weeks long, rather than more than a month as originally planned.

By engaging with the staunchly unionist Ciudadanos, the government has alienated the pro-independence Catalan Republican Left (ERC), whose tentative support helped Mr Sánchez form a new administration in his January investiture.

On Wednesday, ERC voted against the government. The party’s spokesman Gabriel Rufián accused Mr Sánchez of “riding roughshod over the spirit of the investiture, a spirit which was a platform for progressiveness and a wall against fascism”.

On taking office, the coalition government, made up of Mr Sánchez’s Socialists and the leftist Unidas Podemos, agreed to seek a political solution to the longstanding Catalan territorial dispute through talks with the region’s government. The coronavirus crisis has put those negotiations on hold and they now look even more dormant.

Before supporting the government in this week’s parliamentary vote, Ciudadanos announced that it was intent on ensuring that “there will be no negotiating process with ERC or [other] separatists aimed at dynamiting the equality of Spaniards”.

There was further confusion when the government appeared to renege on a hurried deal it had signed with the pro-independence Basque party Bildu to roll back the entirety of an existing labour law. The change of tack came just hours after Bildu had voted in favour of the extension to the state of emergency and it has created friction within the governing coalition.

El País newspaper warned that these events have “destroyed the eroded negotiating credibility of the government [and] left it exposed in parliament”.

These developments follow weeks during which the right-wing opposition has fiercely attacked the government. On Wednesday, Pablo Casado, leader of the conservative Popular Party (PP), accused Mr Sánchez of behaving “like a headless chicken”.

Increasing numbers of Spaniards have been taking to the streets in recent days to express similar opinions, often disregarding social distancing. Daily protests in wealthy districts of Madrid, which began with a few dozen participants, have grown, with many participants demanding that lockdown restrictions be lifted in the city.

Some demonstrators have gone to the homes of politicians to barrack them. Among those targeted has been Pablo Iglesias, leader of the Podemos party and a cabinet minister, who said the PP was behaving irresponsibly.

“The demonstrations that you are encouraging, along with the far right, which make a mockery of the state of emergency, are putting in jeopardy what has been achieved by the Spanish people’s efforts,” Mr Iglesias said.