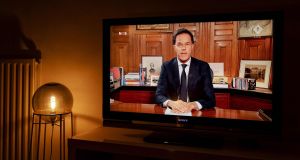 Dutch prime minister Mark Rutte during a televised address on the outbreak of coronavirus. Photograph: Robin Van Lonkhuijsen/ANP/AFP via Getty

The Netherlands will aim to develop immunity to coronavirus among its population by allowing large numbers to contract the illness at a controlled pace, prime minister Mark Rutte announced in a national address on Monday.

“The reality is that in the near future a large part of the Dutch population will be infected with the virus,” Mr Rutte said. “We can slow down the spread of the virus while building controlled group immunity.”

“It can take months or even longer to build group immunity, and during that time we need to shield people at greater risk as much as possible.”

The idea of developing group immunity to coronavirus, also known as Covid-19, is controversial. It has been supported by Sweden’s state epidemiologist Anders Tegnell and Britain’s chief scientific adviser Patrick Vallance. But the World Health Organisation (WHO) has questioned its basis in evidence.

“We don’t know enough about the science of this virus, it hasn’t been in our population for long enough for us to know what it does in immunological terms,” said WHO spokeswoman Dr Margaret Harris.

“Every virus functions differently in your body and stimulates a different immunological profile. We can talk theories, but at the moment we are really facing a situation where we have got to look at action.”

Dr Judith Wasserheit, chair of the University of Washington department of global health and co-director of the MetaCenter for Pandemic Preparedness and Global Health Security, said there is limited evidence for the approach and that it would be difficult to protect the vulnerable.

“It would be quite challenging to separate older adults from potentially infectious younger members of the population,” Dr Wasserheit said.

“In addition, we do not know how frequently immunity occurs after infection with this virus, and if it occurs, how strong that immunity is and how long it lasts.”