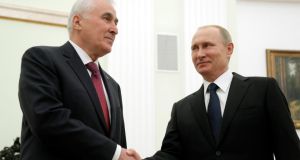 Russia’s president Vladimir Putin shakes hands with Leonid Tibilov, the president of the Georgian breakaway region of South Ossetia, during a meeting at the Kremlin on Wednesday. Photograph: Maxim Shipenkov/Reuters

Russia has signed a treaty of “alliance and integration” with Georgia’s breakaway region of South Ossetia in a move that has drawn sharp condemnation from the US and the European Union.

Georgia lost control of South Ossetia and neighbouring Abkhazia after suffering a crushing defeat in a brief war with Russia in 2008. Russia has stationed thousands of troops in the breakaway regions, bolstering its presence in the strategic former Soviet South Caucasus.

Vladimir Putin, the Russian president, and Leonid Tibilov, the South Ossetian leader, signed a treaty of alliance and integration on Tuesday that created a framework for closer collaboration in defence, security, foreign relations and economic affairs, including the abolition of border controls.

In a statement on the Kremlin’s website, Russia said the treaty formed the basis for a gradual deepening of co-operation with South Ossetia, while observing the territory’s sovereignty.

After the signing ceremony, Mr Putin pledged that Russia would invest nine billion roubles (€140 million) in the next two years to develop infrastructure in South Ossetia, which was devastated during the 2008 war. Russia would also help finance an increase in wages for employees of state enterprises in the territory and raise pensions for citizens holding Russian passports.

Georgia’s foreign ministry described the treaty as the “actual annexation of occupied” South Ossetia by Russia. The US said it would not recognise the treaty and would continue to support Georgia’s independence and territorial integrity.

As the Ukraine crisis intensified last year, the US and the EU faced growing criticism for failing to stand up to Russia during the 2008 war with Georgia, which marked a new, more aggressive phase in the Kremlin’s bid to reassert control over former Soviet territories.

Many in the West now fear that Russia, which is this week celebrating the first anniversary of the annexation of Ukraine’s Crimea, may yet move to take over battle-torn regions in east Ukraine held by pro-Moscow separatists.

Yesterday’s treaty with South Ossetia was “yet more evidence of Russian interference in the affairs of its neighbours and a blatant disregard for their sovereignty and independence”, said Conservative MP David Lidington, the UK’s minister for Europe. “Similar interference has led to the terrible situation we see in Ukraine,” he added.

The treaty calls for a deeper level of co-operation between Russia and South Ossetia than the “alliance and strategic partnership” deal that was agreed between the Kremlin and Abkhazia late last year.

While Abkhazia is determined to cling to as much autonomy as it can, South Ossetia has at times sought unification with Russia since breaking with Georgia in 2008.

“Alliance with Russia is our historic choice,” Mr Tibilov told reporters in Moscow yesterday. “This choice has a solid foundation and deep roots and is associated by our people with the future of their country.”