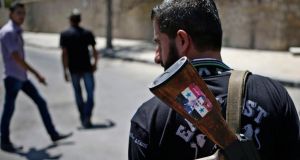 A Syrian military soldier holds his Ak-47 with a sticker of president Bashar Assad and Arabic that reads, “Syria is fine,” as he stands guard at a checkpoint on Baghdad Street in Damascus yesterday. Photograph: AP Photo/Hassan Ammar 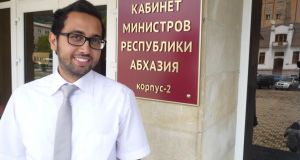 Milad Gogua outside his new workplace, the foreign ministry of Abkhazia, a separatist region that has broken away from Georgia. Photograph: Dan McLaughlin

“I’m so sorry I cannot invite you to my home to eat and drink,” says Sameer Qardan (66) with an apologetic smile. “I would love to host you properly. But I simply have nothing to give you.”

He pushes forward a plate of biscuits in the office of the International Circassian Association in Nalchik, southern Russia. Its walls are hung with the green-and-gold flag of the Circassian people and a map showing where they have settled since being forced from their Caucasus homeland.

Circassians live all over the world, but the largest communities outside Russia are in Turkey and the Middle East, where they settled after more than a million of them were killed, deported or fled during Russia’s 19th-century conquest of the land between the Black and Caspian seas.

Another conflict has now driven hundreds of Circassians back to their ancestral home, a place many know only from stories and traditions passed down from generation to generation.

‘Two souls’
“I have two souls – one here and one in Syria, ” says Qardan. “Syria is our homeland, too. It embraced us and we put down roots there. We never suffered any discrimination and Circassians are respected in Syria – and wherever we live – because we do our jobs well and never betray the land that we live on.”

Qardan, who taught English at Damascus University, is no ardent supporter of president Bashar al-Assad. But he fears above all the threat of Islamic extremism.

“Syria is being destroyed by both sides,” he says.

“We are not with the regime – we want reforms in a non-violent way. But with all its faults, the dictatorship is not as bad as the Islamists. They will never recognise the rights of anyone who does not share their beliefs.” Along with legends, songs, dances and a strict code of conduct centred on hospitality and respect for elders, Circassians are immersed from childhood in their own tragic history, particularly the Russian ethnic cleansing that many Circassians call genocide.

This small nation has been shunted around the world by other people’s wars, and Syria’s collapse is the latest such calamity.

Qardan’s family settled in Syria’s Golan Heights in 1899, and farmed there until the region was bombed and seized by Israel in 1967, and the family lost its land.

They moved to Damascus and then to Kuwait, where they again lost their property when Iraq invaded in 1990, prompting them to return to the Syrian capital. “And now it is happening once more,” he says, throwing his hands in the air.

“We left Damascus when we became afraid for our two sons and daughter. Killing and kidnapping are common there now, with no questions asked.”

No Russian
Like many returnees from Syria, Qardan paid for his family’s flights to Russia and is renting an apartment. He and his children do not speak Russian or have Russian citizenship and, being unable to find work in Nalchik or access funds in Syria, he may soon have to return to Damascus.

“People here have received us warmly and the authorities do what they can. But this is not a wealthy place and there are not many jobs around. When the money runs out, we will have to go back, even though the children are still afraid of the fighting.”

Some groups are pressing Russia to offer all 100,000 or so Circassians in Syria repatriation to their ancient homeland. But Moscow is wary ahead of next year’s Winter Olympics in Sochi, fearing they may stir up protests around an event that will be held on old Circassian territory, 150 years after they were finally routed.

The alpine competitions will take place in the mountains at Krasnaya Polyana (Red Meadow, named for the Circassian blood that was spilled there).

The North Caucasus are still unstable – militants occasionally stage attacks in and around Nalchik, and Chechnya is only two hours away – but Qardan says his family feels safe here.

Syria’s collapse has thrown millions of lives off-course, hurling them in utterly unexpected directions. Qardan had at least visited the Caucasus once before, and speaks the Circassian language.

Milad Gogua (24), on the other side of the mountains, is navigating entirely new territory. Gogua is Abkhaz, one of the other nations driven from this region some 150 years ago.

He does not speak Abkhaz, or Russian, and had no plans to visit his ancestral homeland – never mind move there permanently – before war broke out in Syria. Now he is not only living in Abkhazia with his relatives, and preparing to marry his Syrian-Arab fiancee in the coming months, but he constitutes the entire Arabic-speaking section of the foreign ministry of the tiny self-declared republic, which broke from Georgia in an early 1990s war.

“In Syria, we people from the Caucasus were kind of sitting between the two sides, the government and the rebels, to see what would happen,” says Gogua, an English literature graduate from Damascus University.

He has already received an Abkhaz passport, and hopes it will soon be of use beyond Russia and the other four countries that recognise the region’s independence from Georgia.

Arab world
“We’re working hard on this. Maybe I can help get the Arab world to recognise us,” he says. The local authorities are happy to welcome members of their diaspora, hoping that they will boost Abkhazia’s economy as well as its population.

“I don’t think I’ll go back to Syria,” says Gogua.

“I don’t think life will be good there after the war. This is my grandfather’s land, and this is where I want my kids to grow up.”

Over the Caucasus in Nalchik, Qardan does not share Gogua’s youthful optimism.

“I feel I am walking in darkness, not knowing where I am going,” he says.

“I hope Syria will be restored and people will live together as they did. It is my dream. But it will not happen soon.”