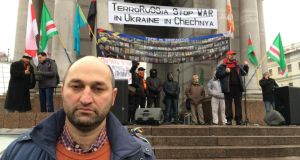 Chechen activist Akhmed Alikhadzhiyev at a Kiev rally he helped organise for solidarity between Ukraine and Chechnya. Photograph: Daniel McLaughlin

“Who asked for a selfie with Adam?” Amina Okuyeva wrote on Facebook last month, next to a picture of her with husband Adam Osmayev.

But the snapshot, like the couple’s life, is somewhat unusual.

Clad in camouflage and carrying Kalashnikovs and grenade launchers, Osmayev and Okuyeva are pictured somewhere in eastern Ukraine, where they are among a growing number of Chechens now fighting Russian-backed separatists.

Moreover, the photo was taken just days after Osmayev’s release from jail in Odessa, where he had been held for nearly three years on suspicion of plotting to blow up Russian president Vladimir Putin – charges that were eventually quashed.

“If Ukraine loses this war it will be regarded as a victory for the Russian empire. But if Ukraine wins it will bring freedom for Chechnya and for Russia itself much closer,” Osmayev told The Irish Times by phone from the front line. “And we are ready to fight to the end.”

For many Ukrainians, last winter’s revolution was ultimately a struggle to end centuries of Russian domination; and Moscow’s furious, bloody and costly reaction to Kiev’s westward tilt revealed the strength of Putin’s hostility towards it.

Now opponents of the Kremlin’s increasingly authoritarian rule – from Chechen rebels to veteran liberal activists – are not only drawing inspiration from Ukraine but making the war-ravaged, near-bankrupt state the base from which they hope to topple Putin’s regime.

Osmayev joined an “international peacekeeping battalion” founded by Isa Munayev, who was a military leader in Chechnya during de-facto independence in the late 1990s, before Putin reasserted Moscow’s control over the region with a second war in a decade.

Munayev arrived in Ukraine this year from Denmark, where he heads a Chechen diaspora group. His battalion includes dozens of Chechens as well as other foreigners and Ukrainians.

“But this isn’t just a military effort,” Okuyeva said, wearing a camouflage headscarf and sipping tea in a café in Kiev, during leave from the front line.

“In Ukraine we can create an information platform, because the media is free. We can say what we like and be heard. In Russia it’s impossible to have such a platform – from here we can tell the whole world what is happening in Russia.”

Olga Kurnosova, a familiar face and strident voice at Russian opposition rallies for more than a decade, is already here.

She arrived in Ukraine from Moscow in October, having been warned by a trusted contact that Russian police were planning to arrest and frame her on some trumped-up charge.

She grabbed a few essentials, told friends on a phone she thought was bugged that she was leaving for St Petersburg, and instead travelled by minibus to Belarus. At Minsk airport she waited until the last possible moment to buy a ticket for fear she would be stopped from leaving, then boarded a flight for Kiev.

“I held my breath until that plane took off,” she said.

Kurnosova was arrested countless times at protest rallies in Russia, spending many nights in police cells, since the days 20 years ago when she was on St Petersburg city council and Putin worked in the mayor’s office.

He was such a “dull, insignificant” figure that she has few strong memories of the man whose regime she accuses of driving her from homeland, along with more than 100 other Kremlin critics whom she said have recently relocated from Russia to Ukraine.

“It’s impossible to change things in Russia through elections now . . . and by taking part you are only legitimising the corrupt system,” Kurnosova said.

“We should form an opposition abroad, linking groups in Ukraine with Russian communities in places like the Baltic states and Moldova . . . so that, when the time comes, we have a transparent, functioning system to put in place [in Russia].”

Kurnosova sets no store by Putin’s huge approval ratings, saying most Russians dare to give pollsters only “politically correct” answers.

She thinks the country’s elite could turn on the president if his policies expose them to sustained financial pain. “There is a feeling of panic in the elite already. They have no ideology – it’s all about money – and if they think they could keep their wealth by getting rid of Putin, they might do it.

“If they alter their trajectory, it may be possible to change Russia without bloodshed,” Kurnosova added, “but I only give that a 5 per cent chance.”

For Kurnosova, like most of her compatriots and for world leaders, the idea of Russia collapsing into bloody chaos is the stuff of nightmares.

“The last war of the Russian empire is happening here in Ukraine, which is an outpost or a fortress of European civilisation against Russia,” Okuyeva said. “When Russia loses, it will break up, and the Urals, Siberia and Chechnya and the North Caucasus will be free.”

On the front line, Osmayev said “thousands” of Chechens in Europe would fight for Ukraine if Kiev legalised their status and gave them citizenship.

For now, Okuyeva added, most of the Chechens on Ukraine’s side are acting as advisers to the country’s military and volunteer battalions. The separatists in eastern Ukraine have their own warriors from Chechnya, loyal to its Kremlin-backed warlord Ramzan Kadyrov, including a “death battalion” with orders to capture or kill Chechens fighting for Kiev.

“We see messages online saying they are looking for us and we have information that they are active here,” Osmayev said, confirming that enemies from Russia’s bloodiest domestic conflict were now hunting each other in eastern Ukraine.

“We are looking for them too,” he added. “We are trying to make sure we get them first.”