Rescue and emergency workers tend to casualties and wreckage at the scene of the Ankara car bombing which killed 34, the second such attack to hit the capital in less than a month. Video: FOX 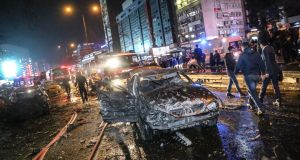 A car bomb tore through a crowded transport hub in the Turkish capital of Ankara on Sunday, killing at least 34 people and wounding at least 75 more, the second such attack in the administrative heart of the city in less than a month.

The blast, which could be heard several kilometres away, sent burning debris showering down over an area a few hundred metres from the justice and interior ministries, a top courthouse, and the former office of the prime minister.

Police helicopters hovered overhead as a large cloud of smoke rose over the city centre.

“A total of 27 of our citizens were killed when a car exploded at Kizilay’s Guven Park, and close to 75 of our wounded citizens were taken to various hospitals for treatment,” the Ankara governor’s office said in a statement.

One senior security official told Reuters initial findings suggested the attack had been carried out by the Kurdistan Workers Party (PKK) or an affiliated militant group, but there was no immediate claim of responsibility. A second official said gunfire was heard after the blast.

TAK claimed responsibility for the previous car bombing, just a few blocks away on February 17th. That bombing killed 29 people, most of them soldiers, near the military headquarters, parliament and other key government institutions.

The pro-Kurdish opposition HDP, parliament’s third largest party, which Erdogan accuses of being an extension of the PKK, condemned what it described as a “savage attack”.

State broadcaster TRT said the car had exploded at a major transport hub, hitting a bus carrying some 20 people near the central Guven Park and Kizilay Square. It said the area was crowded when the explosion happened at 6.43pm local time, or 4.43pm GMT.

Nato member Turkey faces multiple security threats. As part of a US-led coalition, it is fighting Islamic State in neighbouring Syria and Iraq. It is also battling PKK militants in its southeast, where a 2 1/2-year ceasefire collapsed last July, triggering the worst violence since the 1990s.

Turkey sees the unrest in its largely Kurdish southeast as deeply linked to events in northern Syria, where the Kurdish YPG militia has been seizing territory as it fights both Islamic State and rebels battling president Bashar al-Assad.

In its armed campaign in Turkey, the PKK has historically struck directly at the security forces and says that it does not target civilians. A claim of responsibility for Sunday’s bombing would indicate a major tactical shift. – Reuters