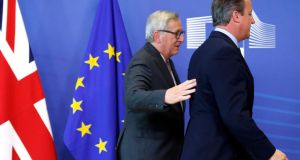 In what is likely to be his final summit, Mr Cameron told his fellow EU leaders over dinner that, although the UK wanted to retain access to the single market, concerns about immigration needed to be addressed.

His comments – which signalled the challenges faced by the UK and the EU as they strive to reach a new agreement – came amid signs of increasing divisions across the EU about how much leeway to give the UK.

German chancellor Angela Merkel said the evening talks were “deep and intensive” but she didn’t see a way of avoiding a British exit from the EU.

“I don’t see a way to turn this around,” she said. “This is not the hour for wishful thinking but to look reality in the eye.”

He said Mr Kenny had told him that after seven centuries of conflict between the two islands a new, close and warm relationship had been established in recent years and that relations between the two countries had never been better.

Mr Cameron said a new relationship between the UK and the EU would now have to be forged but people in Britain had to realise that it was impossible to have all the benefits of membership without some of the costs.

Mr Kenny said “some little time” should be given for the Conservative Party to elect a new prime minister”.

While Ireland’s position echoed that of states such as the Netherlands and Denmark, Mr Cameron received a cool response from others.

Luxembourg’s prime minister Xavier Bettel said the UK and the EU could be “married or divorced, but not something in between”.

French prime minister Manuel Valls told the National Assembly in Paris that “it’s not up to the British Conservative Party to set the agenda”.

As David Cameron faced his counterparts, political volatility continued in the UK as Labour Party leader Jeremy Corbyn defied a no-confidence motion among Labour MPs backed by 172 votes to 40.

Mr Corbyn said he was elected Labour leader by 60 per cent of party members and supporters “for a new kind of politics” and would “not betray them by resigning”. The MPs’ vote had “no constitutional legitimacy.”