Call for prosecution of EU over migrant deaths in Mediterranean 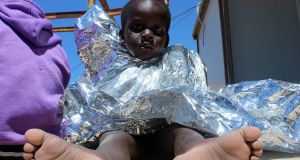 A child who was among 73 migrants rescued by a coast guard patrol after the inflatable boat carrying them capsized off the western Libyan coast on Sunday. At least two died and 25 were missing. Photograph: Ayman al-Sahili/Reuters

A legal submission to the International Criminal Court has called for the EU to be prosecuted for the deaths of migrants trying to cross the central Mediterranean, as a result of the “deterrence-based migration policy” it has implemented since 2014.

The 244-page submission was sent to the court on June 3rd, and accuses the EU of being implicated in crimes against humanity.

Lawyers behind the submission include Juan Branco, who has worked at both the ICC and as an adviser to WikiLeaks, and Omer Shatz, an Israeli who lectures at Sciences Po University.

The submission says EU policy is responsible for turning the central Mediterranean into the world’s deadliest migration route. “Between January 1st, 2014, and end of July, 2017, over 14,500 people died or were reported missing. Two incidents in one week in April 2015 alone cost the lives of 1,200 people,” it says.

The EU had non-governmental rescue ships removed from the Mediterranean, while “dramatically” deepening co-operation with the Libyan coastguard, the submission says. The EU has spent tens of millions of euro on the coastguard, paying for training and equipment.

Between 2016 and 2018, more than 40,000 people were on boats intercepted by the coastguard in the central Mediterranean, according to the submission. Those caught were then transported to Libyan detention facilities, where there is widespread exploitation and abuse.

“The coastguards of Libya, when they catch you, they slap, beat you and the EU is really sentencing us to death in Libyan detention. It is better to die in the sea, rather than to be locked for years in the detentions,” an Eritrean man currently detained in Libya told The Irish Times through the WhatsApp messaging service.

Migrant detention centres are ostensibly run by Libya’s department for combatting illegal migration, though in reality militias are often in charge. Dozens of refugees and migrants interviewed by The Irish Times have spoken of going days without food, water or medical treatment while locked in cramped conditions with poor sanitation. In one centre, refugees and international organisations say 22 detainees have died since last September, including three women and one child.

In a press conference on Monday, an EU spokeswoman said she couldn’t comment on proceedings that hadn’t been initiated. “More generally I think that the EU’s track record on saving lives in the Mediterranean speaks for itself,” she said. “It is not the EU’s policy that is causing these tragedies, it is the cruel and inhumane business model used by traffickers and smugglers, exploiting people’s misery and putting people’s lives at risk.”

Conditions for thousands of refugees and migrants locked up in Libyan detention centres became even more precarious in April, after renewed fighting broke out in Tripoli. Air strikes have hit detention centres and food supplies were badly affected. About 3,000 people are in detention centres on the front lines of the fighting, according to the United Nations refugee agency, the UNHCR.

“The reality of the situation must not be hidden, even if the European Union denies it,” said an Eritrean man currently locked up in a Tripoli detention centre.