Brexit explainer: What is in the withdrawal agreement? 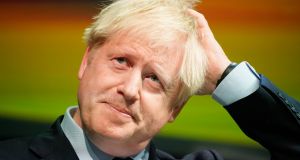 So what the hell has happened now with Brexit?

EU and UK negotiators have agreed a final deal in Brussels that would allow the UK to leave the EU – possibly by the October 31st deadline, if ratified – more than three years after the UK voted to leave the EU. The deal would avoid a hard border on the island of Ireland, a condition set by both sides in December 2017.

Wait, was there not a Brexit deal agreed before?

Yes, but the so-called backstop to avoid a hard border in the original Withdrawal Agreement was rejected by the House of Commons three times, ultimately forcing British prime minister Theresa May out of office. This left it to her successor Boris Johnson to try another route.

1 Susie Dent: ‘Jimmy Carr is incredibly rude to me. I took it as a compliment’
2 Man with electric scooter who died in Meath was due to get married in the coming weeks
3 My friends keep mocking my new boyfriend’s small penis
4 Hospitality industry suffers another blow as New Year’s Eve festival is cancelled
5 Tour de France: Every yellow jersey winner must feel guilty by some association
6 Chris Johns: Boohoo exposed on pay and conditions in digital economy
7 Blackrock and Mulhuddart: How Covid-19 affected two Dublin suburbs
8 More than 100 people gather in Co Donegal for anti-Covid-19 restrictions rally
9 Trump selects Amy Coney Barrett for supreme court
10 Co Donegal hotel offers €2 rooms to locals to circumvent Covid-19 outdoor dining rules
11 Luggala estate reopens to walkers for first time since March
12 Hundreds of thousands in China given ‘emergency’ Covid-19 vaccine
13 Kevin Babington: Learning to live again after life changed forever on Long Island
14 Fintan O’Toole: Covid-19 pandemic might be good for the arts – eventually
15 Neven Maguire’s Midweek Meals: Quick and easy meals for the family
16 Tanya Sweeney: It was never my place to ask why she wanted to die
17 Political focus shifts as Government desperately tries to avoid new lockdown
18 Breda O’Brien: What if RBG had focused on persuading others that both lives matter?
19 Hotel bookings collapse in wake of additional Covid restrictions
20 Labour takes poll lead over Tories as parties see switch in fortunes
21 David McWilliams: The better the economy does, the more Covid-19 spreads
22 Traffic chaos as ‘singing and dancing’ woman stops car in middle of motorway
23 ‘Entirely wrong’ to remove pandemic payment from students, says Sinn Féin leader
24 Sam Bennett: ‘A green jersey in the Tour de France is such a highlight of my career’
25 Mary McAleese memoir: Fascinating, but not the full story
26 UCD professor asked to resign from EU committee over Covid-19 claims
27 ‘I’m frightened by people whose stupidity is putting my life at risk’
28 Bill & Ted in middle age: ‘We felt if we did it with heart, it would work’
29 Prospect of a contested US election outcome in 2020 is very real
30 Brendan Gleeson as Donald Trump: ‘A mediocre impression and possibly a great performance’
31 UCC students face expulsion if they breach Covid-19 guidelines
32 ‘To die of love’: The 1968 sex scandal that still fascinates France
33 The far right rises: Its growth as a political force in Ireland
34 Five lessons I learned preparing my house for sale
35 Michael O’Leary is the boss you want to lead an airline out of crisis
36 In this strangest of recessions, what happens next for Ireland?
37 How to fight the psychological fatigue of Covid-19’s second wave
38 Man charged and remanded in custody over €40,000 drugs seizure by gardaí in Cork
39 Why there is some good news in the latest Covid-19 data
40 Ireland faces devastating blow due to our failure to develop ferry services to Europe
Real news has value SUBSCRIBE