The 1,500 works found in squalid apartment include pieces by Picasso, Matisse and Renoir 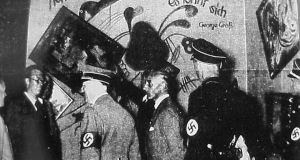 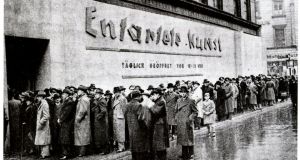 Crowds lined up to visit the Degenerate Art exhibition in Hamburg in 1938. 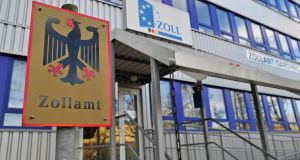 An exterior view of the customs office near Munich, where according to media reports 1,500 paintings seized by customs agents are being stored. Photograph: Lennart Preiss/Getty Images 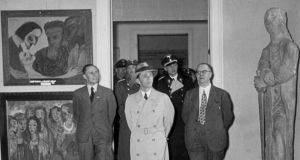 The beige apartment block in Munich’s upmarket Schwabing neighbourhood was an unremarkable 1960s structure. The apartment of Cornelius Gurlitt was squalid and stuffy, with all but one window shuttered to the outside world.

When the police came calling in 2011, they found the elderly, white-haired man living in darkened rooms, surrounded by rubbish, cartons of fruit juice, tins of sausages and packets of dried dumplings – many dating back to the 1980s.

Amid the chaos, leaning against the walls, stacked on the floor and poking from drawers, were hundreds and hundreds of old sketches, paintings and prints.

They are now believed to include the work of masters such as Picasso, Chagall, Matisse, Renoir and Munch.

In other rooms, police found works by German modernists Otto Dix, Franz Marc and Ernst Ludwig Kirchner. None of the reported 1,500 works had been seen in public for more than 70 years – all were considered lost in wartime destruction.

As police officers emptied the apartment of the greatest haul of looted art in history – with an estimated value well over €1 billion – Cornelius Gurlitt, now 79, sat impassively in his bedroom.

He had let no one into his apartment for decades in a bid to maintain his secret life of ill-gotten gains. Now it was all over, because of a spot check on a train from Zürich to Munich in 2010.


Money launderers
The EC 197 intercity is a favourite among wealthy German money launderers and thus well-staffed with customs officials with a trained eye. On an evening in September 2010, they noticed, heading to Munich, a 76 year-old who, hours earlier, had travelled in the other direction.

The asked him if he was carrying any money. The man was reportedly nervous, muttered something about an art deal in Basle and, without warning, pulled out an envelope from his jacket pocket containing €9,000 in fresh €500 notes.

Just short of the €10,000 limit for declaring cash, he was allowed to continue his journey. But officials took his name and performed a background check. They found that Cornelius Gurlitt, though he said he lived in Munich, had no official address in the city.

He also had no tax number and no health insurance and had never appeared to have worked. Yet he had a current account in his name containing about €500,000. Where did his money come from?

The events that led them to raid the Munich apartment were set in motion in the Bavarian capital 73 years earlier, on June 29th, 1937. Nazi leader Adolf Hitler met his propaganda minister Joseph Goebbels for lunch to discuss an exhibition mocking European modern art, in particular from the Weimar period so hated by Hitler, a failed landscape artist.

That evening the Nazi propaganda minister noted in his diary that he had been given “carte blanche to seize these works in all museums”. He entrusted the job to Adolf Ziegler, then president of the Reich Fine Art Chamber.

In a 10-day trip of some 6,000km, Ziegler performed one of the greatest cultural smash-and-grabs in modern times, visiting 101 museums in 74 cities and seizing some 21,000 works of art.

On July 19th, 1937, the hastily collected works were displayed in Munich under the heading Degenerate Art. Just in case any of the visitors – 420,000 in all – intended to enjoy the greatest ever show of modern art in Germany, they were handed tendentious red pamphlets: “Tormented canvas, psychological decay, sick fantasies, mentally ill bunglers: visit the exhibition Degenerate Art.”


High value
Despite their low opinion of the works, the Nazis knew their value and after the exhibition had completed its tour of Germany they began selling many of the works on the international market through trusted art dealers.

One of these dealers was Hildebrand Gurlitt, father of Cornelius. Born into an artistic family in Dresden, Gurlitt was an early champion of Picasso, Klee and others – a passion that had brought him into conflict with the Nazi authorities.

He established himself in Hamburg in 1930 but was eventually deposed as head of the city’s Kunstverein (art society) because he had a Jewish grandmother. Gurlitt remained on in the city, running a private gallery visited by many international visitors including a young Samuel Beckett.

In his diary of November 1936, the Irish man recorded viewing works by Max Beckmann and etchings by Otto Dix.

As he continued his journey south through Germany in 1936 and 1937, visiting galleries along the way, Beckett noted that directors were literally ripping artworks off the walls. Most ended in the hands of a small circle of dealers, including Gurlitt, who were controversial in German art circles because of their dispensation from the Nazis to deal in the so-called degenerate art.

Gurlitt defended the practice later, saying he helped German Jews turn their artworks into badly needed foreign currency as they fled the country. At some point in the Nazi era, Gurlitt began hoarding the art he was snapping up at bargain-basement prices.

But his entire art collection, stored in his Dresden apartment, was destroyed in the bombing of the Saxon capital in February 1945.

At least that was the story he told Allied interrogators. They believed him and even classified Gurlitt as a victim of Nazi persecution because of his Jewish grandmother.

Gurlitt continued in the art business until he was killed in a car crash in 1956. Some years later investigators quizzed his widow Helene about the looted art that passed through her husband’s gallery.

She repeated his Dresden story and the trail went cold – until customs investigators, suspicious about Cornelius Gurlitt’s finances, shadowed him for months and eventually raided his apartment.


Empty frames
Among the artworks and squalor they found dozens of empty frames, suggesting the dealer’s son had sold works over the years and lived from the proceeds. In a file they found his mother’s 1960s correspondence insisting everything was burned in Dresden.

These documents could be crucial in the upcoming legal battle over the ownership of the seized art. Many of the works in the Munich cache were reportedly displayed in the Degenerate Art show, but not all works’ provenance can be completely established.

Where no sale agreement can be traced, it is possible that a court would order the artworks returned to Cornelius Gurlitt. Unless, that is, the German authorities use the letters of his late mother to argue that she and her husband lied about the works’ destruction in Dresden and thus forfeited their right to ownership.

Few details have emerged of the individual works recovered from the apartment and now stored in a secret depot in Garching, near Munich. But already the find means hundreds of art history books will have to be rewritten with works, believed lost,now resurrected.


Legal battle
Before the works are seen again in public, however, a long legal battle looms. Though some art was seized by the Nazis, many so-called degenerate works were sold by their collectors to dealers before they fled, and then on to public museums.

Thus these museums may be seen as the ones disappropriated by the Nazis, even if the works had only recently entered their collections. This may be challenged by lawyers for heirs. Under the terms of the 1998 Washington agreement on Nazi-confiscated art, all works sold in the Third Reich is considered a “forced sale”, entitling the heirs to restitution even if the statue of limitations for challenging such sales has passed.

Anticipating a haze of legal claims and counterclaims Bavarian authorities kept the find – made in 2011 – under wraps until now to allow one of Germany’s leading looted art researchers to dig up as much provenance information as possible.

As the provenance investigation continues, German police say their hunt for art stolen by Hildebrand Gurlitt is far from over.