Band of Brüder: a German view of wartime

Generation War, a TV miniseries about the second World War which engaged a new generation of Germans, begins tonight on RTE Two 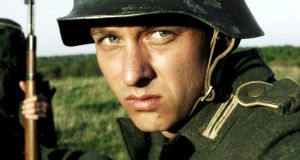 To outsiders’ eyes, German television can be a dispiriting wasteland of witless comedy and bizarre folk-music extravaganzas. But there is one genre that Germany still does very well: the miniseries.

Creating event television may seem an anachronistic endeavour in the era of YouTube and Netflix. Earlier this year, millions of Germans sat down once more to confront the real shadows of the past. Unsere Mütter, Unsere Väter ( Our Mothers, Our Fathers ) was billed as epochal television, and over three nights up to eight million people – a quarter of the available audience – watched the story of five twentysomething friends dragged into the second World War.

The series starts on RTÉ Two TV tonight, billed as Generation War. It is an unflinching and violent depiction of the experiences of five friends during the years 1941-1945 and according to RTÉ "is regarded as a turning point in German television, given its portrayal of the role of ordinary Germans during WWII".

The broadcaster says each episode in the three-part miniseries was watched by record audiences of more than seven million (around 10 per cent of the population) when it was aired by German broadcaster ZDF.

The friends part company in 1941, promising to meet up again in Berlin at Christmas, but the war has other plans for them. Two brothers are enlisted into the Wehrmacht, a young woman joins the Red Cross, and a Jewish friend attempts to flee Nazi Germany, aided by an opportunistic girlfriend who dreams of being the next Marlene Dietrich.

The tale, as told through these five pairs of eyes, force a Hitler-jaded audience to lay aside their knowledge of what lies ahead. In five extraordinary performances, five young German actors fill their archetypal characters with the certainty of youth, and allow it to drain away slowly with each successive month of war.

The €15 million production, a seven- year labour of love for its producer, Nico Hoffmann, avoids black and white tones, painting characters in shades of grey to match their moral limbo, trapped between the moral high ground of later generations and the moral low ground prepared by parents who voted for Hitler and disaster.

The miniseries shows the complexity of the characters and their situation without absolving them of the guilt for, or consequences of, their wartime actions.

“This is a generation that killed, many times,” says Hoffman. A friend of his father’s was the source of one scene in the film, in which a soldier sent to burn down a shack encounters an elderly Russian couple, who offer him tea. “My father’s friend didn’t just burn down the house but the entire village,” he says. “In the end, there were only 80- year-old Russian women left, clutching their teapots.”

The producer took another calculated risk by framing the miniseries as a final chance for viewers to engage with the last war generation – not of victims but of perpetrators. Given the level of Third Reich dross dished out almost daily in the German media, it was far from certain that this strategy would work. Weak viewership figures could have sent a disastrous signal that, seven decades on, Germans are irretrievably apathetic to their terrible past.

Thankfully, things turned out differently, and Hoffman demonstrated that the Third Reich doesn’t have to be turned into a Tarantino freak show to engage a young audience.

“We did the Hitler film Downfall , but the debate this miniseries has sparked in Germany is remarkable; we’ve never seen anything like it,” says Dorothee Stoewahse of Betafilm, the distributor, earlier this year. “It’s one thing to sell to Spain, but we’re in advanced talks with the US and the UK – that’s new.”

Television doesn’t get any stronger than Unsere Mütter, Unsere Väter , and anyone who watches will understand a little better why the shadow of German history is more complex than a marker moustache on a political poster.