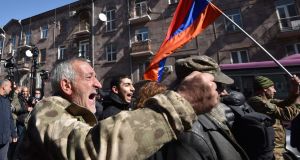 Opposition supporters march through the streets of Yerevan on Friday to demand prime minister Nikol Pashinyan’s resignation over his handling of the Nagorno-Karabakh conflict with Azerbaijan. Photograph: Karen Minasyan/AFP via Getty Images

Thousands of Armenians and Georgians have taken to the streets of their capitals to demand that their governments step down and call snap elections, as political turmoil gripped the neighbouring states in the strategic Caucasus region.

Armenian prime minister Nikol Pashinyan continued to be at loggerheads with the country’s military general staff on Friday, a day after he accused them of attempting a coup by telling him to resign over a dispute with two high-ranking officers.

The most senior officer involved, general staff chief Onik Gasparyan, refused to leave his post on Mr Pashinyan’s order and joined other top brass in denouncing the government, which has been under huge pressure since Armenian forces ceded much of the Nagorno-Karabakh region to Azerbaijan in fighting last autumn.

“You think the army will easily agree that Pashinyan illegally removes their head? No. The army will rebel. I call on the army to rebel. The army shouldn’t carry out illegal orders,” opposition leader Vazgen Manukyan told protesters in Yerevan on Friday.

“The people must take to the streets and express their will to avoid a bloodbath and crisis,” he declared. “Either we get rid of them [the government], or we lose Armenia. ”

Another prominent opposition figure, Artur Vanetsyan, said he and his allies would meet Mr Pashinyan only “to discuss the question of his resignation. A meeting to discuss any other issue is pointless.”

Mr Pashinyan, who took power in 2018 after peaceful pro-reform protests, accuses some officers of trying to evade scrutiny over the Nagorno-Karabakh defeat and of doing the bidding of a political old guard long tainted by corruption scandals.

Armenian president Armen Sarkissian has pledged to seek a negotiated solution to the crisis, and held talks with leaders of the ruling and opposition parties, as well as with Col-Gen Gasparyan.

“France hopes that dialogue can be established in this country by relying on the legitimacy of the president and the prime minister,” said French foreign minister Jean-Yves Le Drian. “The elements of Armenian democracy must hold out.”

US state department spokesman Ned Price urged all sides to show “restraint and to avoid any escalatory or violent actions. We remind all parties of the bedrock democratic principle that states’ armed forces should not intervene in domestic politics.”

In Tbilisi, the capital of Georgia, thousands marched on Friday for political change and the release of opposition leader Nika Melia, who police arrested at his party’s headquarters on Tuesday for refusing to pay an increased bail fee over charges dating back to a 2019 demonstration.

The government insists the authorities are simply upholding the rule of law, but Mr Melia’s United National Movement and other opposition parties accuse the ruling Georgian Dream party of using increasingly autocratic measures and of rigging last autumn’s parliamentary elections.