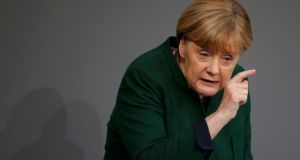 German chancellor Angela Merkel speaking during a heated debate at the Bundestag in Berlin on Wednesday. Photograph: Fabrizio Bensch/Reuters

At a heated Bundestag debate in Berlin on Wednesday, ostensibly called to debate the budget, proceedings were dominated by concern over populism and the long shadow of US president-elect Donald Trump.

Though she didn’t mention Mr Trump by name, the German leader made clear who she was talking about when she warned that old assumptions about democratic debate no longer applied.

Established democratic parties needed to find new ways to “reach and inspire people”, she said, whose “fears about stability” made them easy prey for people operating now outside the traditional media landscape and without the media rulebook.

“Something has changed . . . populism and political extremes are growing in western democracies,” said Dr Merkel. “Today we have fake sites, bots, trolls – things that regenerate themselves, reinforcing opinions with certain algorithms and we have to learn to deal with them.”

Last week, President Barack Obama warned about the influence of fake news, believed to have influenced the US presidential election outcome. While social media platforms have disputed their influence on the poll, the German leader warned Facebook and others to do more to crack down on manipulated news or face tighter regulation.

Irish Minister of State for European Affairs and Data Protection, Dara Murphy, in Berlin for talks this week, said it was important to work with social media companies to find solutions .

“But given the open nature of these sites, it is impossible to have accuracy all that time,” he said.

After talks at the interior and foreign ministries over the last two days, focused on Irish Brexit concerns, Mr Murphy said he was struck by the level of detail all his German counterparts had on specific Irish concerns. Some government MPs, he said, had gone so far as to back a separate Irish section within Brexit talks.

Back in the Bundestag, with an eye on the European Parliament calls to suspend accession talks with Turkey, Dr Merkel said it was more important than ever to keep open dialogue channels to Ankara.

“Which doesn’t rule out mentioning clearly the alarming things that can be seen,” she said.

Opposition politicians attacked Dr Merkel’s announcement on Sunday that she would run for a fourth term next year.

Dr Sahra Wagenknecht, co-leader of the Left Party in parliament, said people were “furious” with Dr Merkel’s apathy towards their concerns.

“It seems that even a Donald Trump has more to offer economic politics than you,” snapped Dr Wagenknecht at the chancellor.

That prompted uproar from the government benches, who accused Dr Wagenknecht of blurring the line between right- and left-wing populism.

“Once it was ‘proletariat of the world, unite’,” said Thomas Oppermann, Social Democrat floor leader. “Now it’s ‘populists of the world unite’.”