Angela Merkel gets the message: she needs Wolfgang Schäuble 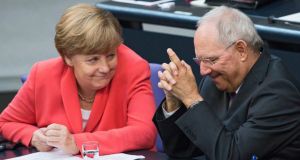 For her 61st birthday yesterday, Angela Merkel received two presents in the Bundestag. The first – welcome but unnecessary – was a bunch of flowers. The second – unwelcome but necessary – was a green light from deputies to join negotiations for a third bailout package for Greece.

If this was House of Cards, the birthday girl would been given a third gift: a knife in the back from her long-serving finance minister.

But nothing nasty like that ever happens in the Bundestag. Instead, Germany’s flinty finance minister Wolfgang Schäuble reminded the chancellor that she has never been more politically dependent on him.

Throughout the Greek crisis, Merkel has counted on Schäuble (72) to negotiate tough EU-IMF bailout deals, and then sell them at home to increasingly sceptical MPs and voters. Since last weekend’s endurance test in Brussels, however, cracks have appeared in Berlin’s most fascinating political relationship.

Spotting her chance, Merkel, then Schäuble’s No 2, knifed him and Kohl, her mentor, to snatch the party leadership in 2000. When she assumed office five years later, she invited her former boss to serve in her cabinet.

As finance minister since 2009, Schäuble has become the most influential bailout negotiator in the eurogroup of finance ministers – and one of the most loathed men in Europe. But not so in Germany.

When Merkel thanked Schäuble yesterday for his “hours and endless hours” of Brussels bailout talks, deputies gave him – not her – sustained, enthusiastic applause.

It was a sign of the deep- rooted respect Schäuble enjoys on the CDU backbenches – far deeper than Merkel – and an indication that his proposal for a Greek “time-out” from the euro had not damaged his standing in Berlin in any way.

Critics around Europe have decried his “time-out”proposal as a dagger to the heart of the currency union and European integration.

Schäuble disagrees. Two decades after he devised the concept of a two-speed Europe in a 1994 paper, he believes that keeping Greece on board, whatever the cost, is a sure-fire way to a no-speed Europe.

However, loyal minister that he is, he left those concerns at the Bundestag door yesterday when, in a nod to Greek leader Alexis Tsipras, he made the case for the third programme in which he doesn’t believe.

Senior coalition figures say Schäuble has been “agitating” against further aid for Greece with CDU backbenchers for some time, even if he kept his personal doubts to himself in the Bundestag yesterday.

He reminded deputies that, should talks on a third Greek bailout end in a deal, they will have another chance to vote on it – and, he implied, on Merkel’s euro crisis strategy.

Which raises the tantalising question: who would government deputies listen to more if the chancellor’s disagreement with her finance minister on Greece escalates?

Some 16 years after she humiliated him, Schäuble has quietly reminded Angela Merkel that, in a parting shot, he could yet return the favour.