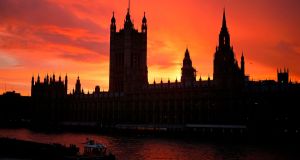 The sun sets behind the Palace of Westminster, the home of the Houses of Parliament in central London as talks on a trade deal between the EU and the UK failed to reach agreement. Photograph: Tolga Akmen/AFP via Getty Images

Announcing their decision to pause trade talks between Britain and the European Union on Friday night, chief negotiators Michel Barnier and David Frost said “significant divergences” on key issues meant the conditions for an agreement were not met.

But in escalating the talks to their political principals, Ursula von der Leyen and Boris Johnson, they made clear that a deal remains in prospect.

Johnson will speak to Von der Leyen on Saturday and he is also likely to call other European leaders, including French president Emmanuel Macron. The remaining gaps on fisheries, the level playing field and governance can only be bridged with high-level political intervention.

The two sides are still at odds over how much access EU fishermen should have to British waters; an agreed framework for subsidy control and other guarantees of fair competition; and how the deal should be enforced.

Some EU member-states led by France are demanding a high level of cross-retaliation so that if Britain backslides in one policy area, it can be hit where it hurts in another.

A deal requires both sides to move beyond the negotiating mandates given to Barnier and Frost and calls for creative solutions that can satisfy the political needs of each party.

Fisheries, although economically insignificant on both sides of the English Channel, is politically radioactive, particularly in Britain and France.

Johnson needs a clear win on fisheries to offer flexibility on the level playing field and governance and still win his Conservative Party’s support for any deal.

His foolish decision to include clauses that would renege on the Brexit withdrawal agreement in the Internal Market Bill has raised the bar on governance because the EU cannot take on trust the promises of a state that has already boasted about breaking international law.

Despite the remaining gaps, the decision to escalate the negotiations to a political level is a good sign insofar as the chief negotiators believe there is a chance that the politicians can resolve their differences.

If they succeed, a deal could be made as early as Monday, allowing Johnson to withdraw the offending clauses from the Internal Market Bill and for next week’s European Council to sign off on the agreement.