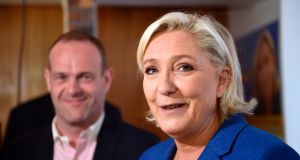 Marine Le Pen, leader of the far-right Front National (FN) party, and Steeve Briois, mayor of Hénin-Beaumont, where Ms Le Pen was campaigning in her bid to win a seat in the National Assembly in legislative elections on June 11th and 18th. Photograph: Philippe Huguen/AFP/Getty Images

The defeated French presidential candidate Marine Le Pen hit the campaign trail again on Friday, in Hénin-Beaumont, a former coalmining town in northern France where she won 58.2 per cent of the vote on May 7th.

Ms Le Pen, the leader of the extreme right-wing Front National (FN), now hopes to win a seat in the National Assembly in legislative elections on June 11th and 18th. She stood in the same constituency twice before, losing by only 118 votes in 2012.

Ms Le Pen waited until the eve of Friday’s deadline to declare her candidacy, leading to widespread speculation that she hesitated after her defeat by Emmanuel Macron, her niece Marion Maréchal-Le Pen’s withdrawal from politics, signs of disloyalty on the part of her closest adviser Florian Philippot, and the defection of Nicolas Dupont-Aignan, the conservative politician who Ms Le Pen had promised to appoint as prime minister.

Ms Le Pen had not spoken publicly since the night of the election, when she promised to renovate the FN and make it the chief force of opposition against Mr Macron.

Explaining her readiness to undertake another campaign so soon after her presidential defeat, Ms Le Pen told TF1 television: “I considered that the largest number of FN deputies could enter the National Assembly, and that my place was at the head of my troops.”

Ms Le Pen’s announcement took the form of a double mea culpa, for the anti-euro policy that contributed to her defeat, and for her poor performance in the May 3rd debate against Mr Macron.

“Obviously, I am well aware that the subject of the euro worried the French a great deal, and even, it must be said, in an almost irrational manner,” Ms Le Pen said. “But it’s a fact, and we will have to take account of it.” The issue will be settled at the FN’s party congress which is slated to take place at the end of this year or early next year.

FN vice-president Florian Philippot threatened on May 11th to resign if the party abandons plans to leave the euro. Four days later, Mr Philippot announced he was founding an association called Les Patriotes within the FN. Ms Le Pen has long wanted to rename the party, and Les Patriotes is believed to have been the name she had chosen.

Ms Le Pen’s poor preparation and aggressiveness in the May 3rd debate so disgusted her niece Ms Maréchal-Le Pen that she left the television studio halfway through. Ms Le Pen admitted to having adopted an “abrupt” tone.

“And then, it’s undeniable, there was this debate, which was a failure,” Ms Le Pen said. “I wanted to highlight my great fears about Emmanuel Macron’s policies . . . I did it with ardour. I did it with passion. Perhaps too much ardour, too much passion. I know some didn’t expect it.”

But Mr Philippot loyalists are candidates in more than half of the approximately 15 constituencies where the FN could win seats in the legislature, a fact that is heightening tensions within the party.

Ms Maréchal-Le Pen announced her withdrawal on May 10th. But on May 18th, Ms Le Pen’s niece broke a taboo by making a strong overture to Laurent Wauquiez, the leader of the most right-wing faction of the conservative party Les Républicains, in an interview with Valeurs Actuelles magazine.

Mr Wauquiez was “one of those we would have things to say to, and to do together”, she said.