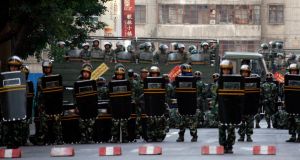 Armed Chinese soldiers in Urumqi during deadly riots in 2009, when local Uighurs turned on Han Chinese in an incident that led to deadly reprisals by Han on Uighurs a few days later. Photograph: David Gray/Reuters

The Xinhua news agency said 17 people were killed, including nine policemen, as rioters stabbed passersby and police and set fire to police cars, before police shot and killed 10 assailants in Lukqun, a desert township in Turpan prefecture, around 200km south of the provincial capital Urumqi.

Xinhua cited officials with the region’s Communist Party committee saying the violence began when “terrorists” were discovered in a building by officials searching for weapons.

The violence takes place just weeks ahead of the fourth anniversary of deadly riots in Urumqi, when local Uighurs turned on Han Chinese in an incident that led to deadly reprisals by Han on Uighurs a few days later.

Deadly riots
The riots killed nearly 200 people, mostly ethnic Han Chinese, and left more than 1,700 wounded. There is a heavy security presence in the region.

In April an incident in the western city of Kashgar left 21 people dead.

China re-established control in Xinjiang in 1949 after crushing the short-lived state of East Turkestan, and Beijing says Xinjiang is an inalienable part of the territory of China.

It blames separatist Uighur Muslims from the East Turkistan Islamic Movement, who it says trained in militant camps in Pakistan, for a simmering separatist campaign in the region that has occasionally boiled over into violence over the past 20 years, usually swiftly suppressed by military forces in the area.

Progress
The Chinese say they are bringing progress to a backward region and boosting it economically.

China has long claimed militants in the region are trying to introduce an extreme form of Islam, but human rights groups believe Beijing exaggerates the threat from militants to justify harsh controls.

The largest province in China, Xinjiang accounts for 16 per cent of its land area, but only 2 per cent of the population. However, it has witnessed more than its fair share of the country’s prosecutions for “endangering state security”, which the Dui Hua Foundation said was a possible sign of “ethnic discrimination” against Uighurs.

“The continuing repression and provocation is a reason for the conflict,” said Dilxat Raxit, a spokesman for the Munich-based World Uighur Congress, which represents Uighurs overseas, in a statement.