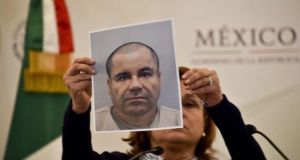 Joaquín Guzmán Loera, the infamous drug lord known as El Chapo, had never heard of Sean Penn. “What’s the name of this actor again?” he asked his lawyer when a Mexican television star contacted him about doing an interview with Penn.

The world now alternately lauds and lambastes Penn, a two-time Oscar winner and a film star for more than 30 years, over his lengthy article in Rolling Stone magazine that recounted his secret trip to a mountain hideout in Mexico to interview the drug lord.

But a series of private cellphone messages leaked in the Mexican news media on Wednesday show that it was a television star, Kate del Castillo, who truly attracted Guzmán’s attention.

The messages, first reported by the newspaper Milenio, were obtained by Mexican authorities who were monitoring the actress and her contacts with Guzmán and his associate during the period after the cartel leader broke out of a supposedly escape-proof prison through an tunnel burrowed into his shower.

Guzmán had as far back as 2014 made efforts to reach del Castillo, but it was not until shortly before his escape that a relationship began. Written over the course of three months, both before and after the October 2nd interview with Penn, the messages offer a rare window into the psyche of one of the world’s most wanted criminals.

The messages also arguably relay more about the personality of Guzmán than Penn’s 10,000-word article, which was published the day after the fugitive’s capture.

To the surprise of many, the leader of the largest narcotics organization in history also comes across as oddly caring and polite. For the seemingly boundless carnage and pain Guzmán’s Sinaloa cartel has sowed both in his own country and abroad, he appears incongruously human.

Guzmán says he wants del Castillo to meet his mother. He offers to get her a cellphone so they can communicate safely, then instructs an associate to get her something fashionable, pretty and with a large screen. Preferably a pink one. In the messages that surfaced Wednesday, Guzmán does not solicit anything of del Castillo outside of friendship and business. There is nothing sexually explicit in the hundreds of messages, taken over the course of three months. Instead, he comes across as more paternal.

He promises he will protect her, care for her as he would “his own eyes,” a common phrase of intimacy shared between fathers and daughters in Mexico. To this she responds, “No one has ever taken care of me”. Del Castillo did not respond to questions sent to her representative on Wednesday. Instead, she said on Twitter: “Not surprisingly, many have chosen to make up items they think will make good stories and that aren’t truthful. I look forward to sharing my story with you.”

The dialogue is filled with flattery from Guzmán, referring to his new friend as a “lady” and “the best thing in the world”. Ranging from the logistics for their meeting with Penn, to happy birthday wishes and details of the progress of del Castillo efforts to produce a film about Guzmán, the conversation displays mutual trust and gratitude.

“I have no way to repay what you are doing for me and my kids,” Guzmán said. He calls del Castillo “the kindest and smartest woman in the world,” whom he “greatly admires”, adopting a formal tone despite the casual format of messaging.

Del Castillo expresses her affection for Guzmán, calling him a “beautiful friend” and constantly thanking him for his unfailing trust. The actress, who played the head of a narcotics ring in a popular Spanish-language television series, said it “would be a dream to meet and share my tequila with you,” a reference to a brand she had been marketing. After their meeting, the messaging continued.

She confessed to Guzmán that she had “barely any sleep” since they first met. “I am more excited about you than about the piece,” Guzmán replied, referring to the Rolling Stone article.

She worried, though, that the authorities were monitoring her. In their last conversation, almost two months before Guzmán was arrested in his home state of Sinaloa, del Castillo warned him that she was being followed and her communications were being tapped. She feared she might lead the Mexican authorities straight to him. She had already done so once. Days after the meeting, Mexican marines raided a compound in Durango where Guzmán was staying, nearly capturing him. She did not want that to happen again.

“I can’t risk you like that right now,” she said. “It is too dangerous, no matter how much we would like to see you.”