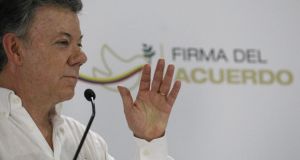 Colombian president Juan Manuel Santos said the Northern Ireland peace process was the “inspiration” behind a historic agreement which is due bring an end to 52 years of civil war. Photograph: Christian Escobar Mora/EPA

The Colombian president has said the Northern Ireland peace process was the “inspiration” behind a historic agreement which is due bring an end to 52 years of civil war.

The conflict between the Colombian government and left-wing Farc rebels has killed estimated 260,000 people.

President Juan Manuel Santos and rebel leader Timoleon Jimenez, known as Timochenko, are due to sign a peace accord on Monday

In an interview with the BBC ahead of the signing, the president said he has kept a close watch on Northern Ireland’s peace process ever since his close escape from an IRA bomb in Piccadilly.

“It was many years ago . . . We were walking in Piccadilly and we passed the In and Out Club. About 30 or 40 seconds later, a bomb that was in the rubbish exploded. The wave of the bomb hit us.

“Years later, many years later, the IRA negotiated. When I saw the picture of the Queen shaking hands with one of the IRA leaders, I thought, ‘oh my God, this is possible’. I must tell you the IRA process has been an inspiration for me in many aspects.”

Under the new deal, the Farc will be relaunched as a political party. The agreement will be put to Colombian voters in a popular vote on October 2nd.

It comes after four years of talks between president Santos and Timochenko.

The pair are due to shake hands on Colombian soil for the first time and sign an agreement using a pen made from a bullet used in the conflict. President Santos said the deal will boost economic growth and unite the country.

“War is always more costly than peace,” he said in an interview with the BBC, warning that it will take time for Colombian society to recover from decades of conflict.

About 2,500 foreign and local dignitaries are to attend a signing ceremony in the walled, colonial city of Cartagena.

The president said the decision to use a bullet-pen was intended to illustrate Colombia’s transition from a country of bullets into a country of “education and future”.

Former tánaiste Eamon Gilmore, the EU’s special envoy for the peace process in Colombia, has described the deal as “hugely historic”.

On foot of developments, the EU has decided to “suspend” the Farc from its list.

“This decision will take effect upon the signature of the peace agreement,” said EU foreign policy chief Federica Mogherini.