Decision on giant of country’s politics, who is accused of fraud and bribery, is a landmark 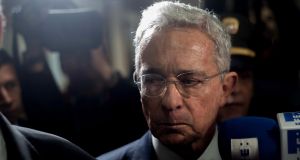 Former Colombian president Alvaró Uribe at the supreme court in 2019. He now faces up to a year of house arrest. Photograph: Juan Zarama/EPA

Colombia’s supreme court on Tuesday ordered the detention of a former president and longtime giant of Colombian politics, Álvaro Uribe, amid an investigation into whether he committed acts of fraud, bribery and witness tampering.

The decision is a landmark in a nation accustomed to back-door deals between politicians who were rarely called to answer for their actions in court.

Widely viewed as the most powerful Colombian politician of the past two decades, Mr Uribe had been the subject of investigation for years, but this is the closest he has come to facing a panel of judges. His ability to avoid prosecution had led many Colombians to call him the “Teflon president”.

The court order has the potential to upend the political landscape in Colombia. And it makes him the first president in modern Colombian history to face detention. He will spend the time under house arrest, the court said. While this is far less severe than time in prison, Mr Uribe said he was dreading the confinement.

“Being deprived of my freedom causes me deep sadness,” Mr Uribe wrote on Twitter on Tuesday, “for my wife, for my family and for the Colombians who still believe that I have done something good for the country.”

Mr Uribe was president from 2002-10, and continues to wield outsize power from his seat as senator. The current president, Iván Duque, was little known before Mr Uribe backed him – and he won election in 2018 with a promise to restore Mr Uribe’s legacy.

Mr Uribe’s standing in Colombia makes his detention “really something significant for our country”, signalling a possible shift toward forcing previously untouchable politicians to answer for alleged crimes, said Francisco Bernate, a law professor at the Universidad del Rosario in Bogotá, the capital.

His detention threatens to further polarise Colombian politics, heightening conflict between Mr Uribe’s allies and his opponents over the former president’s legacy.

On Tuesday, Mr Duque attacked his own judicial system for pursuing his mentor, denouncing the fact that Mr Uribe would not be allowed to remain free pending the resolution of his case – something that criminals and guerrillas have been allowed to do, he noted.

“It hurts, as a Colombian,” Mr Duque said, that “an exemplary public servant, who has occupied the highest post in the state, is not allowed to defend himself in liberty, with the presumption of innocence.”

Prosecuting judges have not yet brought formal charges against Mr Uribe, but the Colombian justice system allows judges to detain him pending an indictment if they believe he is a flight risk or could tamper with evidence. He could be held for up to a year as the investigation moves along.

The case stems from an investigation that the supreme court started in 2018. The court’s judges are examining whether Mr Uribe tried to influence the testimony of an alleged paramilitary member, Juan Guillermo Monsalve, pushing Mr Monsalve to retract statements in which he linked Mr Uribe to the creation of paramilitary groups.

Mr Uribe has denied a connection to paramilitary groups, instead saying he fought against them. He has also denied asking anyone to obstruct justice.

If found guilty, Mr Uribe could face approximately six to eight years in prison, Mr Bernate said, though it is likely he would spend the time under house arrest instead.

On Tuesday, as darkness fell, Colombians throughout the capital, Bogotá, leaned out their windows to shout and bang pots in celebration of Mr Uribe’s detention. But in Medellín, an Uribe stronghold, hundreds of supporters gathered to show their support.

“He gave us security like no other president did,” said Catalina Pozada (42), who credited the former president for forcing one of the country’s guerrilla groups to halt kidnappings and highway blockades.

The court’s decision could also affect the current president, Mr Duque, whose popularity sagged during his first year in office, until he got a bump for his handling of the pandemic. His supporters on the right may turn against him for not doing more to keep his mentor free, while critics on the left may use Mr Uribe’s detention to taint Mr Duque and associate him with criminals.