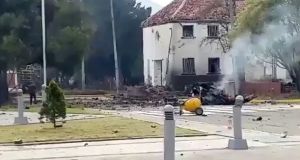 The scene after the car bomb at Bogotá’s police academy. Photograph: BQ noticias

A car bomb exploded at a police academy in Colombia’s capital Bogotá on Thursday, killing at least nine people and wounding more than 20 in an attack that prompted fears of a return to the country’s violent past.

The car rammed into the grounds of the General Santander National Police Academy in the south of the capital before the explosion, which shattered windows of apartments in the vicinity.

President Iván Duque called the bomb a “crazy terrorist act” against unarmed cadets and said he had ordered police and the military to find the perpetrators and bring them to justice.

“Colombians have never yielded to terrorism, we have always defeated it. This will not be an exception,” he told a news conference at the school.

Investigators had identified the car’s driver as José Aldemar Rojas Rodriguez, who was among the dead, said Colombia’s attorney general Néstor Humberto Martínez.

He said the car was carrying 80kg of the high explosive pentolite, which has been used in the past by Colombia’s rebel guerrilla groups.

There was no immediate claim of responsibility for the attack and Mr Humberto Martínez said investigators were searching for its “intellectual authors”.

The defence ministry said in a statement that nine people were killed and 24 wounded.

Eight of the deceased were cadets at the academy, police said.

A police helicopter hovered over the area and family members of cadets at the academy were gathered, many crying as they sought information.

Images on social media showed the remains of a vehicle in flames in the parking area of the police school, and emergency responders at the scene.

“It was a car bomb that unfortunately broke through the security checkpoints,” vice-president of Colombia Marta Lucía Ramírez told reporters.

Car bombs were frequent during decades of civil war between the state and various leftist rebel groups, as well as in the violence involving the Medellín drug cartel led by drug lord Pablo Escobar.

The worst of the war, which killed 260,000 and left millions displaced, ended when the government reached a peace agreement with the Revolutionary Armed Forces of Colombia (Farc) in 2016.

The last major attack was in January 2018 when the largest active rebel group, the National Liberation Army (ELN), detonated a bomb in the northern port city of Barranquilla, killing five police officers and injuring dozens.

The ELN, made up of 2,000 fighters and considered a terrorist organisation by the United States, has been in talks with the government since February 2017 to end the conflict.

Mr Duque, who took office in August, has conditioned peace talks on the ELN suspending hostilities and releasing all hostages.

On Wednesday, the ELN said in a statement it had kidnapped three crewmen of a civil helicopter it “neutralised” last week.

In response, Colombia’s high peace commissioner, Miguel Ceballos, said the ELN “was moving further and further away from the possibility of dialogue”.

There was no indication the ELN was behind the attack in Bogotá or that the kidnapping was linked. – Reuters