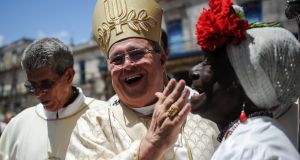 Cardinal Jaime Ortega arriving at the Cathedral of Havana to celebrate his last mass as Archbishop on May 7th, 2016. Photograph: Yamil Lage/AFP/Getty Images 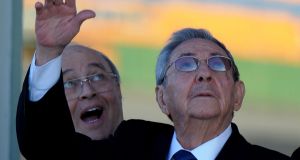 In May 2014, Cardinal Jaime Ortega, the long-time archbishop of Havana and one of the most influential political figures in Cuba, travelled to Washington to give a speech at Georgetown University. Unbeknownst to all but a small number of people, however, the Georgetown event was a hastily-arranged cover story to mask the real purpose of the cardinal’s visit. He was in town to hand-deliver a secret message from Pope Francis to President Barack Obama.

Cardinal Ortega’s involvement in the behind-the-scenes manoeuvring that led to an historic détente between the United States and Cuba had begun in late 2013, when he received a visit in Havana from an author and Cuba specialist working with the Democratic senator Pat Leahy. The emissary, Julia Sweig, told Ortega of a discernible shift in the White House’s view of Cuba and enquired as to whether Pope Francis could help in some way to bring the two sides together.

The contacts continued. Initially the discussions focused on the proposed release of five Cuban spies in detention in the US and an American contractor who was being held by the authorities in Havana. But it quickly became clear that the talks, building on a series of secret meetings between US and Cuban officials in Canada over the previous year, could lead to a wider rapprochement.

Ortega had long been an ally of Pope Francis, who as Jorge Mario Bergoglio had served alongside him for years on the Latin American Bishops’ Council. At a private meeting in Rome in early 2014, the pontiff gave Ortega two letters – one for President Raúl Castro and another for Obama. He was to deliver them personally.

“It was a way of putting them in contact,” Ortega recalls, sitting in a rocking chair in his Havana office, the morning sun streaking through the window. “That was the desire of the Holy Father. People must communicate. He was not a mediator between two nations or between two governments, but he wanted to put the two presidents in contact.”

The Cuban government and the Catholic church have had a famously uneasy relationship. The church took a vehemently anti-communist line before and immediately after the 1959 revolution, and the regime later accused prominent Catholics of trying to topple Fidel Castro. After Castro came to power, public religious events were banned, hundreds of priests were expelled and more than 150 Catholic schools were nationalised. As a young priest in 1966, Ortega himself was sent to a military-run agricultural work camp for a year.

In his time as Archbishop of Havana from 1981, however, relations between church and state underwent a gradual thaw. Under his leadership, the church established itself as virtually the only independent institution with widespread influence on the island.

Ortega, who met Michael D Higgins during the president’s visit to Cuba last month, is credited with having rebuilt church infrastructure around Havana, establishing new churches and renovating more than 40 existing ones. Leveraging a non-confrontational style into a position of rare influence for someone outside the Communist Party, Ortega’s influence rose as Fidel softened his stance on the church. In early 1992, Cuba dropped atheism from its constitution and guaranteed freedom of religion. Relations were cemented after a visit by Pope John Paul II in 1998, after which the government once again recognised Christmas as a holiday.

So, having received his instructions from Pope Francis in 2014, it was to Raúl that Ortega went first. At their meeting, according to the cardinal, Raúl told Ortega that he believed Obama was “an honest man” who had inherited Washington’s long-standing Cuba policy but was not responsible for it. “He was sure that Obama wanted to improve the relationship between Cuba and the United States. He said: ‘that’s why I have never attacked him.’”

At the White House a few weeks later, Ortega handed Obama the Pope’s letter and told him what Castro had said (US officials reportedly kept Ortega’s name off the White House visitor logs for fear that news of the diplomatic shuttling would leak). “President Obama said, ‘I appreciate that.’ Twice. ‘I appreciate that.’ It was a good meeting. It was the first time I met Obama. He was very warm, very open to the proposal of the Holy Father.”

Just over a year later, in August 2015, Ortega stood alongside Leahy as then US secretary of state John Kerry presided over the official reopening of the US embassy in Havana. Kerry was followed last March by Obama himself, who became the first US president to set foot in Cuba since the revolution.

For Ortega and many others in Cuba, satisfaction at that tentative reconciliation is tempered by anxiety about future relations under Obama’s successor, Donald Trump. “Now we are in a very difficult moment,” he says. “We now have diplomatic relations between the two countries, and we have established a dialogue. It was perhaps one of the big results President Obama’s presidency. But will it now be different? We don’t know.”

While Ortega, a softly-spoken, cheerful man, occasionally expressed disappointment at the pace of Cuba’s opening up, the country’s small but vocal dissident community and Cuban-American exiles in Miami believe he became too cosy with the authorities and should have been more vocal in calling for more progress on civil and human rights. Asked about this, Ortega points to my notebook and wags a finger, indicating he won’t speak on the topic.

He is on more comfortable ground when discussing recent reforms, which have made it easier for Cubans to open small businesses or get online. “It’s a good opportunity for the Cuban people,” he says. They needed this space, the possibility to do something by themselves, and it has changed the society.”

By the time Ortega stepped down as archbishop of Havana last year, on the eve of his 80th birthday, having overseen his third papal visit to the island, the position of the church in Cuban society had shifted significantly. It has not been given permission to reopen religious schools and the hierarchy struggles to get its voice onto the airwaves, but today the ranks of the faithful are growing and the church is providing tens of thousands of Cubans with food, education and business training.

Its influence is greater than at any point since the revolution. It is widely believed that Ortega was asked by the Vatican to stay on for five years after formally tendering his resignation on turning 75 partly because he has such a good relationship with the Castros.

He is alive to the irony. Asked whether he still feels any bitterness over having been sent to a labour camp in the 1960s, he smiles and rocks quietly in his chair, considering his words. “No,” he replies after a long pause. “It was a big mistake at that time in the revolution, and the cause of suffering to many people. But in my personal psychology and my Christian faith I don’t feel anger. We have to consider each period of life in the context of the time we were living in, and in the context of the story of our life.”

Article two in a series of four. Tomorrow: How widening access to the internet is changing Cuba