Q&A: The EU and UK have set their red lines and now the talks are on 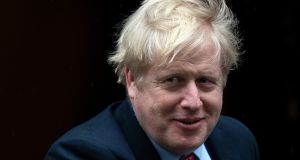 Boris Johnson has said that the UK is determined to escape EU regulations and the oversight of EU courts, but has also said the UK does not intend to slash standards.

The EU and UK have outlined their priorities for the Brexit trade talks, which are now under way. What is at stake here?

The negotiations will be about what trade rules apply in future between the EU and UK.With the UK leaving the EU single market, the current completely free flow of trade between the EU and UK will end on December 31st this year – unless an extension to the talks is agreed, which as of now looks very unlikely.

The talks to come will determine just how different things will be in future.

The big question is whether a deal will be done by December 31st. At most, given the time constraints, a minimal deal just covering goods looks possible, with other issues like services trade postponed until later. And with the UK government threatening to walk away by June if enough progress is not made, tensions are already building.

The UK has said that it wants a trade arrangement similar to that which currently exists between the EU and Canada – though its negotiating guidelines suggest that a bare bones deal covering only trade in goods is the initial UK aim, with negotiations subsequently on other areas. This would eliminate most or all tariffs – special taxes or duties on imports – but would still mean checks and significant bureaucracy on goods going between the EU and UK.

For Ireland, the absence of tariffs would be a big plus but there would still be new costs for exporters and importers.

Consultancy firm Copenhagen Economics has estimated that the cost to Ireland of such a deal might amount to GDP being 3.5 to 4 per cent lower by 2030 than would otherwise be the case. On current forecasts this would mean the economy would continue to grow, just a bit more slowly. One caveat here is that forecasts may be adjusted anyway in the light of the Covid-19 virus.

And if there is no deal in time?

If the UK leaves the transition period without a trade deal, then it will trade with the EU on what are called World Trade Organisation (WTO) terms. This would be similar to what would have happened had the UK left the EU without a withdrawal agreement, as it would involve the disruptive imposition of tariffs on trade in some areas, particularly agriculture and food, and the need for the immediate introduction of customs and regulatory checks and procedures. The UK’s threat to abandon the talks early if enough progress has not been made will underline this risk.

What would this mean for the Irish economy?

This would involve the immediate imposition of significant trade barriers between the EU and UK, hitting exporters and pushing up the cost of imports.

The Copenhagen study estimated that the economic cost of this would be roughly twice as large as if a trade deal were done between the two sides – with GDP about 7 per cent lower by 2030.

More of the costs would be likely to accrue in the early years and growth in 2021 and 2022 could be seriously affected.

And what about the Irish Border?

A key part of the withdrawal agreement was putting in place a new trading regime for Northern Ireland, under which it would follow EU rules in areas of goods and food standards but still remain formally part of the UK customs union.

This was to allow the Irish Border to remain open. For this to work, checks are needed on goods entering Northern Ireland from Britain – otherwise goods could enter the EU single market from the UK without being checked. The UK government has recently cast doubt on its commitment to this deal, saying it wants goods to move freely between Northern Ireland and the rest of the UK. UK Cabinet Office Minister Michael Gove said on Thursday that the Northern Ireland protocol would be implemented “ appropriately” – which still leaves open the question of exactly what London plans in this area.

How this will all works is due to be agreed in a special EU/UK committee before the end of this year.

It is vital for Ireland that this is done on time and functions properly – and doing so would be easier if the EU and UK do agree a tariff-free trade deal, as this would remove one layer of complication. This is also a big issue for businesses in the North, who fear the additional impact and costs from the checks. The EU guidelines say, in relation to the special arrangements for Northern Ireland: “While preserving the integrity of the Single Market, the envisaged partnership should ensure that issues arising from Ireland’s unique geographic situation are addressed.” So some flexibility may be shown by the EU side – but only up to a point.

If there is no trade deal and the Northern Ireland arrangements are not operating then it is not clear what will happen and what steps the EU might seek to secure the single market.

What are the key areas to be agreed?

The EU is insisting that the UK must commit to what is called a level playing field – that it will not cut standards in areas like the environment, workers’ rights and state aid in order to try to gain a competitive advantage.

The EU guidelines say that the EU standards should be the “reference point” in these areas, a phrase which may leave some wriggle room, but not a lot.

However the UK says it is determined to escape EU regulations and the oversight of EU courts.A compromise is possible , but this will be tricky and complicated and all the more so if the UK is trying to do a trade deal with the US at the same time.

A big question is whether the UK government actually wants a deal at all, or is happy to take the economic cost of doing no trade deal for political reasons. We may not really know until the Autumn.