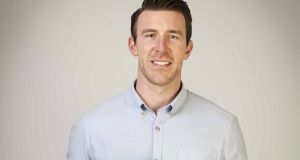 Mark Loftus of the Paddy Box.

Mark Loftus is the founder and creator of the Paddy Box, a business which allows customers send a selection of Irish products to anyone around the world in a gift box. Having launched the company in 2017, Paddy Boxes including Irish staples like Barry’s Tea, Ballymaloe Relish and Tayto have been shipped to more than 100 countries.

While its core product has proved to be a success, Loftus has been expanding his range, having recently launched the Mammy Box which includes treats for new mothers and baby accessories.

The company also sells a “Brekkie Box” including Clonakilty rashers, sausages and pudding as well as McCambridges bread.

What was your reaction when you heard the UK had voted to leave the EU?
We couldn’t really believe that the Leave side had managed to misinform so many impressionable voters in the UK and the Remain side wasn’t able to thwart that.

How is your business likely to be affected?
We ship to about 108 countries but the UK is still a great market for us – we send about 10-15 per cent of our boxes there. We are well versed in customs declarations for other countries but our concern would be an increase in costs or tariffs. With Cadbury’s, for example, a lot of their product comes from the UK so we’ve had to go to Mondelez directly to make sure the supply line will be viable.

When did you begin preparing for Brexit and what contingency plans have you put in place so far?
It took us a while. We stuck our heads in the sand for a long time. Once it started to get serious and there was a real idea there’d be a hard Brexit, we started to go to our suppliers to get an idea of their plans.

Musgraves, one of our suppliers, has been stockpiling for over a year now. DHL will move their international hub for eastern deliveries. Other than that, we’ve sat down with Enterprise Ireland and the local enterprise board and gotten advice from them.

Are you examining new markets/suppliers and, if so, how practical is that?
The United States grew hugely for us last year and we’ve put an emphasis on advertising there. Health is going to be significant for us in terms of corporate. Alcohol is another significant market. We’ve started to research it in the US but it’s a bit of a minefield.

Does Brexit present any opportunities for your business?
There are so many unknowns that it’s hard to see a clear opportunity. We send gift boxes so if Ballymaloe, for example, was facing huge tariffs, there would be an opportunity for us to send that over to people individually if they wanted that, possibly avoiding tariffs.

When do you expect to be Brexit-ready?
We’re just waiting along with everyone else. We can’t be totally ready until we’re informed what is going to happen when they leave. There are still a lot of unknowns.

What’s your best/worst case scenario?
Our best case scenario is that trading remains similar to what it is now with free trade and a seamless enough transition. Our worst case scenario is heavy tariffs on everything. The tariffs are the big thing for us. If big suppliers like Mondelez have significant supply chain issues, that will be a major issue for us and it may become unviable for us to stock Cadbury’s items.

Are you stockpiling goods / raw materials?
Ahead of Christmas, we stockpiled a huge amount. A lot of our stuff is ambient product but with some products we can’t stockpile. With the Cadbury’s stuff, we have stockpiled an awful lot of it.

How might the Irish or British governments, or the EU, help ease the pain of Brexit for your company or sector?
They could inform us what’s going to happen in terms of tariffs. Revenue has been in touch with us but they don’t have information as to what’s going to be hit with tariffs.

Looking out five years, how do you think your business or industry will have changed as a result of Brexit?
It’s hard to know but, if it’s a seamless enough transition, I don’t think much will change. We may have more multinationals coming here which would be good for our corporate business. Our business is growing and growing so we’ve been trying to grow regardless of what Brexit throws up.