Warehouse shortages due to pre-Brexit stockpiling to worsen in January 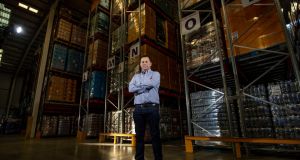 Aaron McAleenan, managing director at Elsatrans Ltd: “If I was to get another 40,000sq ft warehouse, I would fill it tomorrow.” Photograph: Tom Honan

A shortage of warehouse space due to pre-Brexit stockpiling and storage during Christmas and the Covid-19 pandemic will worsen in January when Brexit kicks in, the industry has warned.

Stock-building ahead of Britain leaving the EU single market and customs union on January 1st has led to record levels of freight being moved and long tailbacks of lorries at the British ports of Holyhead, Dover and Folkestone, critical points in the supply line to and from Ireland.

Traders are shipping large volumes of goods through the UK landbridge before customs and other border controls are introduced, resulting in warehouses filling up in the greater Dublin area.

“It is maxed out. It is very difficult at the minute to find available commercial warehousing space,” said Aidan Flynn, general manager of the Freight Transport Association Ireland.

“It is good for the guys who have the warehouses because they have the space but it is a juggling game for others. Goods can only come into the country if there is space for it to come in.”

Demand for warehouse space surged in the early months of the Covid-19 pandemic.

“When Brexit hits, in whatever shape it hits, it is going to get worse. Brexit will exacerbate the problem,” said Mick Curran, chief executive of the Chartered Institute of Logistics and Transport

“It is bad. The hardest one to get is chilled space. It is at a premium and could get worse. If we have producers producing goods and, for whatever reason, they cannot get them off island, what do we do with it? They are chilled goods. Dump it? No. We hold it in storage,” said Mr Curran.

Aaron McAleenan, managing director of Elsatrans, a transport and logistics company in Naas, Co Kildare, said the volume of goods being moved ahead of Brexit was “unprecedented”.

“There are trucks on the roads here in Ireland that you never have seen in Ireland previously. They are moving goods here and going back out empty,” he said.

Bottlenecks on routes due to a 25 per cent increase in freight volumes were delaying deliveries and disrupting the steady flow of goods through a supply chain with limited warehouse space. “The whole supply chain is grinding to a halt,” he said.

The demand for storage has been so great that Mr McAleenan doubled the space he manages in the past two months to 40,000sq ft by taking on two additional buildings.

“It could be flour, packaging material, ingredients. A lot of our customers are in food manufacturing and they don’t want the hassle of having to procure stuff in early January. If they have it here, they can draw from it here,” he said.

Mr McAleenan said there was very little storage available in or around the Dublin area. “If I was to get another 40,000sq foot warehouse, I would fill it tomorrow,” he said.

Mr Curran said it was critical for supply lines to remain open from early January so that goods can continue coming in and exports can continue going out.

“If either of those gets affected, you are going to see a serious block. We won’t be able to produce or export – either way, production stops, costs increase and people lose jobs,” he said.