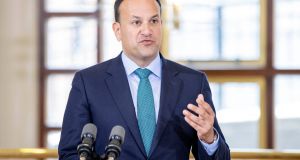 Tánaiste Leo Varadkar has said there was ‘strong solidarity’ with Ireland and its concerns about Brexit at a meeting of EU trade ministers in Berlin. File photograph: Julien Behal Photography.

Tánaiste Leo Varadkar has said there was “strong solidarity” with Ireland and its concerns about Brexit at a meeting of EU trade ministers in Berlin.

All but two EU ministers responsible for trade were present for the informal meeting, hosted by German economics minister Peter Altmaier as part of his country’s six-month EU presidency.

Mr Varadkar said UK plans to renege on parts of the Brexit withdrawal agreement have “backfired and sent out a signal to the world” about the need to have “strong governance structures in place to settles disputes - and enforcement measures as well”.

He said he sensed a common purpose among EU ministers on the need for these in any future free trade agreement negotiated with the UK.

Mr Varadkar had a 40-minute meeting on Sunday with his German counterpart, at which both agreed that the World Trade Organisation (WTO) needed its first woman head.

The two were also in agreement on the need, particularly in the ongoing Covid-19 crisis, to prioritise resilient supply chains rather than pushing on-shoring of production or protectionist measures. Ireland is a net producer of devices such as ventilators but now, as at the start of the pandemic, is relying on German laboratories to deliver additional testing capacity.

“I wouldn’t call this a success but it is very good thing that we have a functioning single market that allows us to use lab capacity in Germany when we need it,” he said. “I think everyone agrees we have to boost our lab capacity in Ireland and we have done that in the last months.”

Mr Varadkar said his trip to Berlin on Saturday, hours after Level Three restrictions came into effect for Dublin residents, was covered by a travel exemption allowing travel for family reasons, education and work.

His Saturday morning flight was necessary, he said, as the direct flight on Sunday would have seen him arrive after the meeting with his German host. Flying on Sunday, with a connection, was an option, he said, but could have brought “complications”.

Rising infection numbers in Germany mean it may be removed from Ireland’s Green List for travel. Meanwhile, German officials were on Monday studying Irish infection rates with a view to declaring Dublin a risk area later this week.

Last week Vienna, Budapest and Amsterdam were put on the watch list, after their new infection rates rose beyond 50 per 100,000 over seven days. If Dublin becomes a risk area, the German rules require, all arrivals to have a Covid-19 test on arrival - or within a 72-hour window.

Mr Varadkar said he had his first and only Covid-19 test to date on Friday before travelling. “Not only did I obey the rules I also, precautionarily, got a test in case the rules changed,” he said.

He expressed concern that extremists in Ireland were using the pandemic, and public insecurities, to rally support for their conspiracy theories. The only response to populism, he said, was to keep providing information to the public.

“I think the mistake can be to dismiss or rubbish extreme opinions,” he said. “That is actually what they want.”