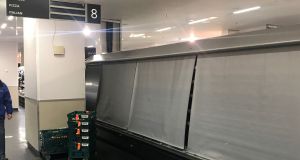 Large gaps have appeared on supermarket shelves in the North in recent weeks. Photograph: PA

The UK will trigger safeguard measures in its divorce deal with the European Union if there are “serious problems” in supplying supermarkets in Northern Ireland, prime minister Boris Johnson said on Wednesday.

“What I can certainly guarantee is that if there are serious problems in victualling or supplying supermarkets in Northern Ireland because of some piece of bureaucracy that’s misapplied then we will simply exercise Article 16 of the protocol,” he told a parliamentary committee.

Article 16 of the Northern Ireland protocol, which covers post-Brexit trade between Britain and Northern Ireland, details so-called safeguard measures, which allow either party to take unilateral measures if there is an unexpected negative effect arising from the agreement. – Reuters