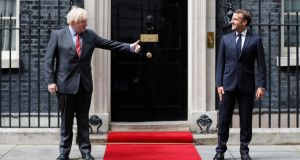 Boris Johnson has told Emmanuel Macron that talks on Britain’s future relationship with the European Union could be wrapped up before the end of the summer, although one of his senior ministers said October was the real deadline for a deal.

The British prime minister welcomed the French president to Downing Street during a visit to mark the 80th anniversary of Charles De Gaulle’s “L’Appel” broadcast from London to rally the French people to support the Resistance.

“They agreed that the partnership between our countries will be crucial in overcoming the coronavirus pandemic and ensuring the global recovery is green and sustainable,” a Downing Street spokesperson said.

“On UK-EU negotiations, the prime minister welcomed the agreement to intensify talks in July and underlined that the UK does not believe it makes sense for there to be prolonged negotiations into the autumn.”

Mr Johnson stepped back from a threat to abandon the talks if the shape of a deal was not in sight by the end of this month and negotiating rounds are scheduled in July and into August. EU chief negotiator Michel Barnier has said negotiations need to be wrapped up by the end of October. Cabinet office minister Michael Gove appeared to endorse that timetable when he appeared before the House of Commons Northern Ireland Affairs Committee on Thursday.

“We don’t have a day per se pencilled in but it is the case that if we haven’t secured significant progress by October then it will be difficult. But again, you know it when you see it,” he said.

“I would hope that we would have clarity beforehand but it becomes increasingly difficult if we’re not on a trajectory for an agreement to ensure that that free trade agreement could be concluded, if we haven’t secured agreement by October.”

Before he went to Downing Street, Mr Macron met Prince Charles and bestowed the Legion of Honour on London for its role during the second World War. The French president laid wreaths at statues of King George VI and Queen Elizabeth at Carlton Gardens and recalled the circumstances of De Gaulle’s broadcast.

“The French army had been defeated in only six weeks, there was despair. But already a patriotic pride and a sense of honour and a strong will to resist lit up French hearts, and especially that of General De Gaulle. He refused defeat and he decided to carry on the fight. He had to find somewhere to shelter, a place for his exile. That was London. The hope was embodied by the last European country able to carry on fighting,” he said.

Mr Macron’s visit came as Mr Johnson’s government suffered another setback in the fight against coronavirus when it abandoned plans to build its own tracing app. It will now adopt the app developed by Google and Apple which is used in most European countries, including Ireland.

Health secretary Matt Hancock declined to say when the app would be ready but officials have admitted privately that it could be autumn or winter before it comes into operation.