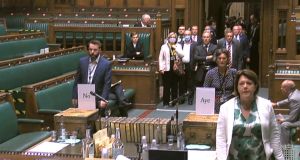 Social-distancing measures appearing to be ignored in the House of Commons earlier this month, after a technology failure forced MPs to join the ‘Mogg conga’ to vote. Photograph: PA

The UK Internal Market Bill, which gives British ministers the power to override parts of the Brexit withdrawal agreement, has passed all its stages in the House of Commons by 340 to 256, a majority of 84 votes. A Conservative backbench rebellion collapsed after the government agreed to give MPs a vote before the Bill’s treaty-breaking clauses are triggered.

It now goes to the House of Lords where critics including the Brexiteer former Conservative leader Michael Howard have said the concession to backbench MPs is inadequate. The Lords have not set a timetable for the Bill’s passage and it is not likely to become law before late November or December.

The European Union has warned that it will not agree a free trade deal with Britain unless the treaty-breaking clauses are removed from the Bill. Former Labour leader Ed Miliband pointed out that opposition to the Bill in Washington was bipartisan, with Donald Trump’s Northern Ireland envoy Mick Mulvaney expressing concern about it in Dublin this week.

“When the Trump administration starts expressing concern about your adherence to international agreements and the rule of law, you know you are in trouble,” Mr Miliband said.

But business minister Paul Scully told MPs the powers were needed as a safety net in case the EU sought to implement the Northern Ireland protocol in a way that undermined the integrity of the UK’s internal market.

“I have spoken to businesses in Northern Ireland, and a number of them are very supportive of this,” he said.

Stephen Farry, the Alliance MP for North Down, questioned Mr Scully’s claim that businesses in Northern Ireland backed the Bill, adding that the government was not acting in the interest of people in the North.

“Breaking the withdrawal agreement and undermining the protocol does not help our businesses one bit. Instead, it places them in a much more uncertain legal situation for doing business,” he said.

“It risks Northern Ireland being turned into some sort of rogue state.”

Mr Farry and the SDLP’s two MPs backed an unsuccessful DUP amendment calling on the government to monitor the impact of the protocol on business. But SDLP leader Colum Eastwood said the Bill was an assault on international law and a threat to the peace process.

“Some people in this House think we have just arrived in this Chamber. They need to understand that we have been coming here for centuries. We have seen it all. When we hear honourable members aghast that the British government intend to break the law, well, we know better. We are not surprised,” he said.

“From the Penal Laws to partition, from Cromwell to collusion, famine and internment, and two Bloody Sundays, we know all about Britain’s adherence to the rule of law. We also know about other outrages. We remember Birmingham and Brighton, Guildford and Warrington, Mullaghmore and Enniskillen, and we are shamed by it all. The reason I mention those events is not that I want to live in the past but that I do not want to go back to it.”