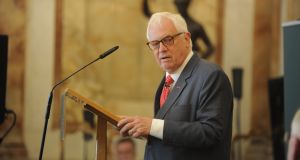 The UK’s plan to close its borders to unskilled workers and non-English speakers is “intended to catch headlines” and “satisfy popular sentiment,” Britain’s former EU commissioner Chris Patten has said.

Mr Patten said that tackling EU migration has always been “an easy way for politicians appearing to tackle the issue in a firm way which can satisfy popular sentiment” when most immigration comes from outside the EU.

“Stopping more people coming in seasonally to pick potatoes and stopping the recruitment of Romanians to work at very low pay in care homes isn’t a very sophisticated way of dealing with labour market problems,” he told The Irish Times.

Speaking ahead of delivering a lecture in Dublin on Tuesday evening, Mr Patten said that future labour market shortages as a result of declining fertility rates and ageing populations in Europe would not be solved with a “few simple slogans or catching a few headlines”.

Mr Patten, a vociferous opponent of Brexit, described this “big demographic problem” as “a much more sophisticated and awkward issue” that could not be solved by “any European country on its own, even Britain outside the European Union”.

The former senior Tory criticised the powerful role given by British leader Boris Johnson to his iconoclastic adviser Dominic Cummings. He described the aide as the “capo of the weirdos” - a reference to Mr Cummings inviting “weirdos and misfits” to apply to work at Downing Street.

Mr Patten said Mr Cummings had “astonishing influence” at No 10 and across the government. He questioned the motivation behind plans by Downing Street to take on the judiciary, abolish the BBC licence fee and challenge other institutions that hold the governing executive to account.

“There is an agenda to eliminate any impediments to the exercise of executive authority in the name of majoritarianism,” he said.

He called Downing Street’s anti-establishment plans an “assault” on institutions that could impede “whatever it is that an executive under dominant No 10 control wants to do”.

“You have precious few institutions left which can actually stand up to a government which is doing crazy things,” said the former chairman of the BBC.

“Even active politicians” who point out difficulties with actions being taken by the prime minister “have a very short shelf life”, he added.

He pointed to Mr Johnson’s sacking of Julian Smith as Northern Ireland secretary because he “intellectually disagreed” with an uncompromising prime minister by contradicting him on Brexit and warning that a no-deal exit would be bad for Northern Ireland.

Mr Patten, who chaired the body that transformed the Royal Ulster Constabulary into the Police Service of Northern Ireland, described Mr Smith as the best Northern secretary “for years”.

He blamed the UK government for reneging on commitments given to the EU in the political declaration by hardening its position before talks begin on a post-Brexit trade agreement.

There was still a view in the Tory government that “cakeism rules, as though we can have our cake and eat it - alas, that is not true,” he said.

If a trade deal is reached, it will be because the UK has “backed down” as London did on the Irish Border issue by agreeing to have a trade border in the Irish Sea.

The British peer, now chancellor of Oxford University, will be speaking on “The Future of Liberal Democracy” in St Anne’s Church on Tuesday night in a lecture organised by Studies, the quarterly journal published by the Jesuits, in honour of the late businessman Peter Sutherland.

Mr Patten said that he has found the Brexit era of British politics “the most depressing period of my life and it goes beyond politics”.

He said his children were “uniformly hostile” to Brexit “not because of any exaggerated enthusiasm for European institutions, but they just can’t understand why a pretty reasonable example of international cooperation with our neighbours, is somehow now regarded as treachery”.

“I find it difficult to be anything other than exceptionally skeptical about the idea that Britain unbound is going to become a great global powerhouse as though we haven’t been important globally for centuries. I mean we have,” he said.