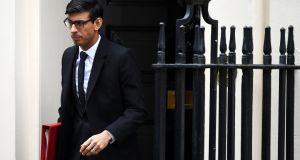 Chancellor of the British exchequer Rishi Sunak: As UK gets set for a coronavirus epidemic and stock markets fall, his first budget has more than Brexit to contend with. Photograph: Chris J Ratcliffe

Boris Johnson’s election victory in December not only removed business concerns over a Jeremy Corbyn-led Labour government but lifted hopes he would be a pro-business prime minister.

But relations are already turning sour over his hardline stance on Brexit. Rather than delivering a bonfire of Brussels regulations, business leaders are reeling from a succession of government announcements that suggest trading will become increasingly difficult and costly without a new comprehensive trade deal.

“I am feeling punch drunk at the moment,” said Nick Allen, head of the British Meat Processors Association, who warned of the impact on consumers if the UK and EU failed to agree a zero-tariffs, zero-quotas trade deal by the end of the year.

“Our members are international companies who can [currently] move products back and forward without worries.”

With the UK stepping up preparations for a coronavirus epidemic and stock markets falling, Rishi Sunak’s first budget on Wednesday may have more pressing issues to deal with. However, business lobby groups want to see Mr Sunak provide some comfort on the biggest long-term issue facing the British economy.

He is not alone, with products from pharmaceuticals and chemicals to clothes and components at risk of being tangled in red tape over customs and product testing.

Dominic Goudie, head of international trade at the Food and Drink Federation, said: “It’s clear that the needs of business are not always at the forefront of government’s considerations.”

Richard Harrow, head of the British Frozen Food Federation and former managing director of Freiberger UK, the pizza maker, who is worried about the impact of post-Brexit immigration and tariffs policies on his sector, said: “It feels like Boris has come out saying that I have a big majority so don’t need to consult business any longer.”

Within days of the UK formally leaving the EU on January 31st, Michael Gove, the cabinet office minister overseeing EU trade talks, started warning businesses about “friction” and “inevitable” checks at the border – a position reinforced by a government spokesperson on Monday.

The British Retail Consortium (BRC) counts up to nine documents that would be needed to sell a British product to a EU country. Under any sort of deal, exports and imports will need a certificate of origin, transit certificates, customs valuation documents and, if exporting to Northern Ireland, destination paperwork to ensure goods are not then moved to the EU.

Without a comprehensive trade agreement, there will need to be other pieces of paper: VAT and excise documents, freight certificates, health and veterinary documents, exit and entry summary declarations, and safety and security permits.

The costs are potentially high. Customs declarations alone cost between £15 to £56 for each product category in a truck – with almost 7,000 freight movements every day in Dover alone, and mixed load lorries commonplace, this means a “significant amount of money per truck”, the BRC said.

HMRC estimates the reintroduction of import and export declarations could add £7.5 billion of annual costs for companies, while the British Chambers of Commerce said customs declarations could jump almost sixfold to about 300 million a year, also citing official estimates.

Manufacturers warn that without a deal that keeps friction to a minimum, much of the cost on importing goods from the bloc will be passed to British consumers. “And it’s not simply about cost,” said William Bain, trade policy lead at the BRC, “it’s also about availability, choice and quality”. – Copyright The Financial Times Limited 2020