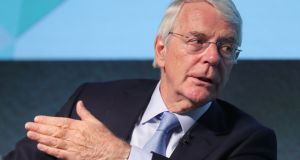 A “miracle” is needed if the United Kingdom is to secure a comprehensive trade deal with the European Union by the end of the year, former British prime minister John Major has said.

Speaking at the European Financial forum in Dublin castle, Mr Major underlined that trade deals take years to complete and that only a few months of negotiations would result in a “flimsy” deal.

The UK officially left the EU on January 31st. Under the withdrawal agreement the UK is due to have completed a trade deal with the EU by the end of December, when it will leave the bloc’s trade and single-market rules.

“How can you negotiate all those complexities in what is in reality a few months?” asked the former prime minister. “It took seven years for the European Union to do a trade deal with Canada which is fairly flimsy. The thought of us doing a comprehensive trade deal with Europe in this time, I think it would be a miracle if that were to occur.”

“There was no need for that time limit – this was a political decision that has been taken that has cut down the time for negotiation in one of the most complex trade deals that the world will ever have seen.”

Claims that the UK can use the European model as a guide for a new deal are misguided, he added.

“It’s very easy to say it’s simple, we’ve got a template because we’ve been a part of Europe. But that is simplistic beyond imagination when you actually come to negotiate the significant difficulties that lie ahead between the European position and the UK ambitions.”

Britain’s departure from the EU will damage both Britain and the EU, said Mr Major. “In my judgment we will be weaker. But Europe will be weaker as well. And do we want a weaker Europe and a world increasingly effectively run by the Chinese and by the United States with Europe trailing a long way behind?”

Mr Major also said he was “sceptical” as to whether the UK could negotiate bilateral trade deals with the US and China which would deliver the same benefits that exist under EU trade deals.

“The day we left the EU we lost 53 free-trade deals negotiated by Europe for the whole of the European Union; that covers 70 countries.

“Are 450 million Europeans going to get the better deal than 60 million Brits? Almost certainly they will. And if we were in Europe we would have got the advantages of that deal.”

Other nations, such as India, may be put off by new restrictions on immigration, he added, noting that shutting down visa options for non-EEA nationals did not “strike me as being the best negotiating position”.

Mr Major acknowledged that many of those who voted in favour of Brexit had been “left behind” but that the ‘leave’ vote was based on “a whole range of reasons entirely unconnected with Europe”.

“It is the folly of referenda that it enables people not to change their government but to express their dissatisfaction against that government on an issue unconnected with who runs the country.”

Asked whether the recent surge in support for Sinn Féin reflected the decision by many Britons to vote for Brexit as a form of protest, Mr Major said he would not comment on the Irish general election results.

“One of the first lessons I’ve learned, and I’m hoping to pass this tip on to President Trump, is that it’s extremely unwise to talk about other people’s elections,” he said. “You know less about them than the people concerned and you’re much wiser to keep those thoughts to yourself.”