UK MPs back Brexit trade agreement by 521 votes to 73

Labour votes with government while all other opposition parties vote against 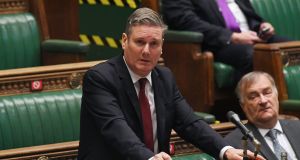 Labour leader Keir Starmer during the debate in the House of Commons on the Brexit Bill on Wednesday. Photograph: UK Parliament/Jessica Taylor/PA Wire

MPs at Westminster have voted overwhelmingly for a trade and co-operation agreement with the European Union which Boris Johnson hailed as the historic resolution of Britain’s relationship with its European neighbours. The House of Commons backed the deal by 521 votes to 73, as Labour voted with the government while all other opposition parties voted against.

The deal is on the verge of becoming law after it received an unopposed third reading in the House of Lords late on Wednesday night.

All but two Conservative MPs backed the deal, with Brexiteers Owen Paterson and John Redwood abstaining because it leaves the terms of the Northern Ireland protocol unchanged. Thirty-five Labour MPs and former party leader Jeremy Corbyn, who currently sits as an Independent, abstained and one voted against.

Keir Starmer said Labour was backing the Bill giving effect to the deal because the only alternative was to leave the post-Brexit transition without a deal. But he criticised the deal as lacking provision for services which make up 80 per cent of the British economy and said Mr Johnson had failed to resolve the dilemma at the heart of his negotiating strategy.

“The prime minister pretends that he has got sovereignty, and zero tariffs and zero quotas. He has not: the moment he exercises the sovereignty to depart from the level playing field, the tariffs kick in. This is not a negotiating triumph,” he said.

Mr Paterson, a former Northern Ireland secretary, said he felt “very torn” because although he wished the agreement well, he could not vote for a measure that would leave the North under EU regulations and customs rules. SDLP leader Colum Eastwood said he believed that, because of Brexit and the Conservative government’s handling of it, the United Kingdom was coming to an end.

“To my unionist neighbours, I want to say this: look at where the DUP has led you and look at where London has left you. It is my firm conviction that we can build a new society together – one built on mutual respect, which recognises and celebrates all our rich traditions,” he said.

Tom Tugendhat, the Conservative chairman of the foreign affairs committee, said that after years of acrimony and anger about Britain’s relationship with Europe, it was time to move on.

“We have been in the EU for only 47 years – that is the lifespan of a Hohenzollern empire. We are leaving the EU, just as Germany left that empire, and we will find a new way of working together. This deal is but the first step on that journey; it is just the concordat that bridges the channel and looks to future co-operation.” – Additional reporting PA