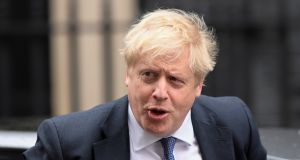 Britain’s Prime Minister Boris Johnson warns he is prepared to walk away from the table and impose new costs on UK business, rather than accept a deal that impinged on British sovereignty. Photograph: Toby Melville

Boris Johnson has laid down a tough red line ahead of Britain’s trade negotiations with the EU, warning that he is prepared to walk away from the table and impose new costs on UK business, rather than accept a deal that impinged on British sovereignty.

Downing Street said: “The UK’s primary objective in the negotiations is to ensure we restore our economic and political independence on January 1st, 2021.”

It is the first time Number 10 has explicitly said that Britain is prioritising sovereignty issues over the demands of British business, which is seeking to minimise barriers to trade when the transition period ends next year.

It is also a warning to the EU27 countries, which are finalising their own mandate for the negotiations, that Britain will not be prepared to accept constraints on its ability to diverge from Brussels rules.

Mr Johnson’s ministers will sign off a negotiating mandate for the EU talks on Tuesday, setting out Britain’s objective of a “Canada-style” free trade agreement, removing tariffs and quotas on goods and limited progress on services.

But the prime minister’s allies said that Mr Johnson will not accept any demands from Brussels that Britain aligns with EU regulations on issues such as the environment, labour law and state aid, as a price for securing a free trade agreement.

“We want a Canada-style deal, but ultimately our priority is taking back control,” said one official close to Mr Johnson, admitting that failing to strike a deal could impose new friction for exporters at the border.

If Britain leaves without a trade deal, it would trade with the EU under World Trade Organisation rules, including tariffs, quotas and considerable paperwork. – Copyright The Financial Times Limited 2020