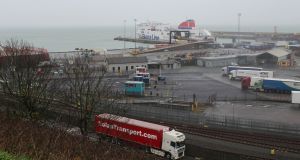 A major European shipping line has decided to open new operations in Ireland out of concern that the UK landbridge route will be “non-viable” for exporters, importers and haulage companies after the end of the Brexit transition period.

There is a fear that the landbridge route will be “absolutely clogged” after the Brexit deadline at the end of December, according to the route director for Danish shipping company DFDS’s new Rosslare to Dunkirk service, Aidan Coffey, who was speaking in Rosslare on Friday.

Criticising a State report which insists that there is sufficient capacity on existing Irish shipping routes, Mr Coffey claimed the review was “betting Ireland’s future economy” on a one-sided analysis.

DFDS’s new direct service each way between the Co Wexford-based Europort and northern France announced on Friday will carry 130 trucks across three ships upon its first sailing on January 2nd. The service will operate six days per week.

“The UK is becoming a non-viable route for companies as far as we can see after January 2nd,” Mr Coffey told The Irish Times.

He said EU-UK border checks will see the landbridge “clogged”, adding on costs and making it less efficient for companies. Haulage companies are also being advised against using the landbridge by suppliers, according to Mr Coffey.

The new service comes despite a report by State agency the Irish Maritime Development Office (IMDO) that stated that enough ferry capacity exists already. However, this latter point has been disputed by hauliers.

Mr Coffey said: “The IMDO report went out to existing players, the four ferry companies operating on Irish seas. However, it didn’t consult with the people who actually use the service. We’ve been consulting with the haulage companies and they know exactly what’s going on.”

He added: “Are we willing to bet Ireland’s future economy on a report that is taken from the views of four existing operators . . .”

The port has studied post-Brexit shipping needs, he said, adding that the three ships on the new route will be increased if there is enough traffic. “We’re expecting high demand,” he said.

Road hauliers have flagged in recent weeks that drivers travelling across Britain could fall foul of tachograph rules.

“If they’re going through the UK, the minute they get to Dunkirk they’ll have to stop and take a nine-hour break,” Mr Coffey said. “This [new route] will be more efficient for companies and allow them to utilise their fleets better.”

Separately, European shipping line CLdN, which already operates between Ireland and continental Europe, is adding a second such service, between Cork and Zeebrugge in Belgium, one of Europe’s busiest sea ports, in January.

The company has increased capacity in anticipation of post-Brexit deadline traffic delays on ferries serving the landbridge route and greater demand from Irish companies seeking to deal directly to mainland Europe.

CLdN will offer eight direct sailings per week in each direction between Ireland and mainland Europe, and will be able to carry significant volumes, including on its so-called “Brexit buster” ferry MV Celine.

The company’s ships are largely for container and unaccompanied lorry trailer traffic, with the capacity to transport a small number of driver-accompanied freight trailers.