UK ‘failed to assess’ if Russia interfered in Brexit referendum 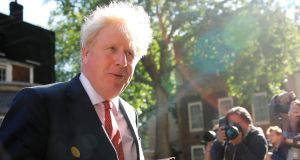 The British government failed to investigate whether Russia tried to influence the 2016 EU referendum despite evidence of interference in other elections, Westminster’s intelligence and security committee has said.

In a report on Russia published on Tuesday, almost a year after it was completed, the committee said it could not determine if Russia had interfered with the referendum because neither the government nor the security agencies had attempted to find out.

Stewart Hosie, a Scottish National Party MP on the committee, said he could not say why the Conservative government failed to ask questions about the EU referendum when there were credible reports of Russian attempts to influence the 2014 Scottish independence referendum, and US intelligence services concluded that Moscow hacked Democratic National Committee (DNC) emails during the 2016 US presidential campaign.

The report was completed last October but Boris Johnson delayed its publication until after last December’s election and until the new membership of the committee was chosen. Downing Street tried to install former minister Chris Grayling as chairman but veteran Conservative Julian Lewis was elected instead with the support of Labour and the SNP.

The report is critical of Britain’s security services as well as the government, complaining that when MI5 was asked for its assessment of whether Russia tried to interfere in the EU referendum, its response was just six lines long. The report said that even if MI5 was understandably wary of getting involved in a political issue, the agency’s “extreme caution” about investigating Russia’s alleged interference was illogical.

“The defence of those democratic processes has appeared something of a ‘hot potato’, with no one organisation considering itself to be in the lead, or apparently willing to conduct an assessment of such interference. This must change,” it said.

The report describes Russian influence in Britain as “the new normal”, adding that the country is one of Moscow’s top intelligence targets. It criticises successive governments for welcoming oligarchs close to Vladimir Putin and their money “with open arms” and allowing an industry of enablers in the City of London to turn the British capital into a “laundromat” for dirty Russian money.

“There is an obvious inherent tension between the Government’s prosperity agenda and the need to protect national security. To a certain extent, this cannot be untangled and the priority now must be to mitigate the risk, and ensure that where hostile activity is uncovered, the proper tools exist to tackle it at source and to challenge the impunity of Putin-linked elites,” it said.

“It is notable, for example, that a number of Members of the House of Lords have business interests linked to Russia, or work directly for major Russian companies linked to the Russian state - these relationships should be carefully scrutinised, given the potential for the Russian state to exploit them.”

In a lengthy response to the report, the government said it had seen no evidence of successful interference in the EU referendum and rejected the committee’s call for a retrospective assessment of whether Russia had tried to influence it. It said the intelligence and security services provide regular assessments of potential interference in democratic processes, adding that Britain’s defences against disinformation were strengthened ahead of last year’s European election and general election.

Labour’s shadow foreign secretary Lisa Nandy said it was extraordinary that the prime minister should have taken the political decision to delay the report’s publication for 10 months.

“The report is very clear that the government has underestimated the response required to Russia and it is imperative we learn the lessons from the mistakes that have been made. The Labour Party calls on the government to study the conclusions of the report carefully and take the necessary steps to keep our country safe,” she said.