Johnson and Von der Leyen are expected to announce agreement 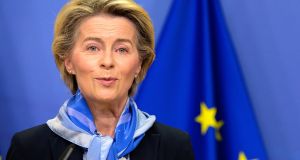 Britain and the European Union were poised on Wednesday night to seal an agreement on their future relationship after the end of the post-Brexit transition next week.

EU member states were put on alert to be ready to scrutinise a text reported to run to 2,000 pages as negotiating teams led by Michel Barnier and David Frost continued to wrangle over the final details late into Wednesday night.

The final stretch of talks were focused on hammering out a compromise on fish, a politically contentious issue in Britain as well as in several EU member states.

If EU ambassadors sign off on the deal on Thursday, the European Council can agree to apply the agreement provisionally from January 1st, pending approval from the European Parliament later next month. MPs will return to Westminster on December 30th to consider all stages of any necessary implementation legislation in a single day, with the House of Lords expected to put it to a vote the same day.

The European Research Group (ERG) of eurosceptic Conservative backbenchers said on Wednesday night that it would examine the details and legal text of any deal “as expeditiously as possible”. They will reconvene a “star chamber” of lawyers led by veteran MP Bill Cash, which gave its verdict on Theresa May’s withdrawal agreement in 2019.

“Given that the new agreement is also highly complex, the star chamber will scrutinise it in detail, to ensure that its provisions genuinely protect the sovereignty of the United Kingdom, after we exit the transition period at the end of this year,” they said in a statement.

Taoiseach Micheál Martin told RTÉ’s Today with Claire Byrne that fish was the final hurdle in the negotiations, and that officials were ready to work on the text on Christmas Day should a deal be ready on time.

“On balance, given the progress that has been made, there should be a deal, and no-deal would be an appalling shock to the economic system.”

Although a deal would ensure tariff-free, quota-free trade between Britain and the EU, Britain’s decision to leave the single market and the customs union means there will be friction and extra bureaucracy for importers and exporters.