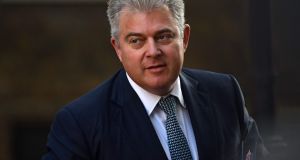 Northern Secretary Brandon Lewis: he told the Commons that the Internal Markets Bill will see Britain reneging on its treaty commitment to the EU. Photograph: Getty Images

The British government has admitted that it intends to break international law by introducing legislation that overrides parts of the Brexit withdrawal agreement’s Northern Ireland protocol.

Northern Secretary Brandon Lewis told the House of Commons that the Internal Markets Bill, to be published on Wednesday, will see Britain reneging on its treaty commitment to the EU.

“There are clear precedents for the UK, and indeed other countries, needing to consider their international obligations as circumstances change.”

Mr Lewis cited the Finance Act in 2013 which he said contains an example of treaty override. “It contains provisions that expressly disapply international tax treaties to the extent that these conflicted with the general anti-abuse rule.”

The Internal Markets Bill and a Finance Bill planned for later this year will give British ministers the power to decide which goods moving from Great Britain to Northern Ireland are at risk of proceeding into the EU single market, and whether goods moving in the other direction should require an export declaration.

The legislation will also limit the scope of EU state aid rules to Northern Ireland.

The protocol says that all goods moving from Great Britain to Northern Ireland should be considered to be at risk of proceeding into the EU single market “unless it is established that it will not be subject to commercial processing in Northern Ireland and fulfils the criteria established by the joint committee” tasked with implementing the agreement.

Mr Lewis said Britain hoped to find agreement on all outstanding issues through the joint committee.

“The clauses which will be in the bill tomorrow are specifically there for should that fail to ensure that we are able to deliver on our commitments to the people of Northern Ireland,” he said.

Mr Lewis’s statement followed the resignation on Tuesday of Jonathan Jones, the government’s chief legal adviser, in protest against its plan to break international law.

Former prime minister Theresa May was among a handful of Conservative MPs to condemn the move during the Commons debate.

DUP MPs welcomed the government’s move, along with hardline Brexiteers on the government backbenches. However, SDLP leader Colum Eastwood said the people of Northern Ireland could not trust anything the British government said.

“At every single turn they have used us as a bargaining chip, as a useful tactic and as part of a cynical game. Rather than taking his steer from cosy chats with the Democratic Unionist Party, will he once and for all accept that people in Northern Ireland –the majority voice in Northern Ireland – will accept nothing less than the full implementation of the protocol?”