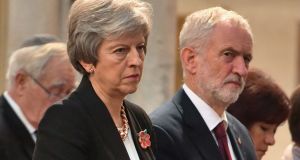 Theresa May and Jeremy Corbyn: both their parties are implying they want to leave the EU in its entirety but might have to stay in the customs union to avoid a hard border in Ireland. Photograph: John Stillwell/AFP/Getty Images

What is the point of being inside the EU’s customs union but outside its single market?

That is the proposition UK prime minister Theresa May is about to try and sell to her cabinet, parliament and the country: a UK-wide backstop to ensure there is no hard border in Ireland should the UK and the EU not agree a trade deal after Brexit.

Many within her Conservative Party and beyond believe the backstop likely to come into effect, and will be permanent if it does.

Labour’s whole Brexit position is a hard-line version of May’s backstop. Jeremy Corbyn’s party will only back a withdrawal agreement if it includes permanent membership of the customs union. On the single market, it merely wants an association agreement, and even that had to be forced on the Corbyn leadership by anti-Brexit MPs.

The mirror image of this half-in/half-out formula is the Norway option of being outside the customs union but inside the single market. This was widely discussed during the Brexit referendum and its benefits are well understood. Norway is free to strike its own trade deals, yet still has relatively painless access to EU markets, requiring only tariffs and product origin checks.

May’s backstop is essentially the Turkey option, which few have ever seriously advocated. Turkey cannot strike trade deals, yet still faces non-tariff barriers to EU markets – the worst of both worlds for a Brexit sold on a free-trade vision.

Although Labour and the Conservatives have reasons for wanting out of the single market in particular, both find those reasons awkward to promote.

The Conservatives want to be seen to have regained control of immigration – this is said to be May’s personal bottom line. Labour wants the freedom to nationalise and subsidise industry. Each cause is too flawed and contentious to justify an overall Brexit policy. So instead, both parties are implying they want to leave the EU in its entirety but might have to stay in the customs union to avoid a hard border in Ireland.

This is no way to sell the English a Turkey. Surveys consistently show a majority of Brexit voters, overwhelmingly in England, would ditch Northern Ireland for a full EU departure – not a sentiment Westminster can disregard for ever.

Officially the British government is aiming for a Border solution that will allow the whole UK, including Northern Ireland, to leave the customs union and the single market. But there are doubts that this can ever be practical. If the choice comes down to an unpopular UK-wide backstop or a “proper” Brexit, Northern Ireland will be cast adrift – consigned to the backstop to the backstop, whatever that turns out to be in any withdrawal agreement.

So the fate of British politics, and perhaps of the UK itself, depends on whether other advantages of a prospective Turkey option emerge. Could the backstop end up looking like a relatively good Brexit?

Donald Trump is a perfectly timed warning of what awaits any medium-sized country trying to strike out alone. China provides another sobering demonstration. The British public will have at least three years of transition, still protected by the EU customs union and single market, to observe big-power trading tactics with mounting alarm.

During this period, most existing EU trade deals will continue to apply to the UK but new ones will not, so people will be reminded of the collective European clout they are losing. The UK will be permitted to negotiate its own trade deals to come into effect after the transition, revealing what a brutal and protracted process that is always likely to be. Debate could soon change from whether to stay in the customs union to whether staying would preserve access to EU free trade deals. That is not the case for Turkey – it has to open its markets to the EU’s trading partners but they do not have to reciprocate. The UK has just about enough economic clout to hope for a better arrangement.

The other backstop benefit that could become apparent during transition is being outside the EU’s overarching political project, regardless of customs union and single market membership. If the Brexit referendum had not passed, the UK would currently be up in arms over recent pronouncements on a European army – the sort of federalising scheme that really drove British hostility to the EU. How many times were words heard to the effect that the UK joined a common market, not a superstate? Federalisation looks set to accelerate during the transition, and hit inevitable bumps in the road, showing the British public that they can stay in the customs union and still escape the aspect of the EU they truly dislike.

However, even this makes the Turkey option look irrational, because it creates an argument to stay in the customs union and the single market – the latter a British creation.

And all of this assumes May gets a withdrawal agreement through parliament. If she does not, all bets are off.