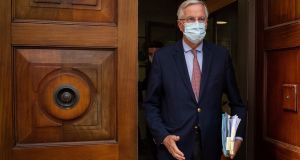 Across the European Union, a grim acceptance is taking hold that London may not wish to reach a deal, and that the British government’s actions may have already made one impossible even if it does.

“The chances that all this will lead to a no-deal, because the British government decided it actually doesn’t want to have a deal, is by now the overriding sentiment in the parliament,” said the European Parliament’s Brexit rapporteur, the Dutch Labour MEP Kati Piri.

“Even if it was a tactic, it was a destructive one,” she said of the British government’s introduction of the internal markets Bill, which would reverse parts of the Brexit withdrawal agreement reached less than a year ago. “It destroyed all faith in the negotiations.”

Yet the prospect of a crash-out does not command the attention it once did.

Across the continent, national capitals are focusing on containing Covid-19 and managing its economic fallout. In Brussels, this week’s showpiece is the state of the union address of European Commission president Ursula von der Leyen, who is expected to address climate change and the future of the bloc as it navigates its way out of the pandemic.

The European Parliament is debating rule of law in Poland, the poisoning of Russian opposition leader Alexei Navalny, turmoil in Belarus, and aggressive Turkish policies in the eastern Mediterranean. Brexit does not feature.

This is partly because it’s structurally cordoned off. The national capitals handed their joint negotiating mandate to Michel Barnier earlier this year, and got on with other business. Preparations for no deal began in earnest in the last period of high drama in 2019; they were already dusted off in July, when it became clear talks were going nowhere.

Neither is there much to debate. London could have played divide and conquer on, for example, fish. But a threat to renege on a previous agreement made less than a year ago was only ever going to provoke a unified response of shock, annoyance, and hardened attitudes.

For now the EU is “full of patience”, a source close to the talks said. “Ready for negotiations, if the other side wanted.” The commission has given the British government until the end of the month to reverse its plans. In the meantime contacts continue. Barnier is expected to meet his counterpart David Frost in Brussels this week.

The fireworks in London are seen as Britain yet again negotiating with itself, as the political class there wrestles with an unpalatable inevitability it has long struggled to accept. This is that once the EU side adopted a position that there could be no border across the island of Ireland, a deal could only be reached in two scenarios.

Either the United Kingdom could remain so closely in line with the EU that no borders would be required anywhere: the minimal-disruption option preferred by the Irish Government and many other member states. Or, Northern Ireland would have a special arrangement to stay in line with the EU, entailing checks along the Irish Sea border, instead of on the land. Britain could diverge at will, depending on how intensive it was willing to allow those checks to be.

Prime minister Theresa May chose the first option and was deposed. Her successor Boris Johnson negotiated, signed, and won an election on the back of the second. If he now accepts neither, there cannot be a deal.