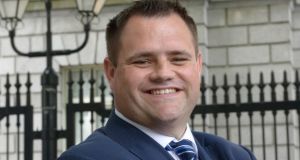 A Fine Gael TD has renewed his appeal to the Government to investigate with a “serious level of scrutiny” the Leave.EU organisation which has relocated its registered office from the UK to Waterford.

The Brexit campaign group which backed former MEP Nigel Farage, re-registered in Ireland because it would lose its domain name if it remained at its Bristol address, following the UK’s departure from the EU.

Dublin Rathdown TD Neale Richmond said it required investigation even if it sought to move “just as a flag of convenience” because of its “absolutely toxic brand of campaigns and politics” which went beyond Brexit and was directed at immigration, the media and individuals including Ministers in the Irish Government.

He appealed to Minister for Local Government Darragh O’Brien and the Coalition “to make sure that Leave.EU, quite simply, is not welcome in Ireland”.

He said the group also “trades in senseless and baseless xenophobia the likes of which we in this country should not and do not have any time for”.

It was one of 80,000 domain names registered to a UK address which have been suspended until the end of March.

After that date they have to show proof of EU citizenship and that they are domiciled in one of the 27 EU member states.

Mr Richmond, Fine Gael’s Brexit spokesman, has written to authorities in Ireland and the EU including the Standards in Public Office Commission (Sipo) the Revenue Commissioners and the Data Protection Commissioner about the group’s domain name registration and its accounts and status with Revenue.

Mr Richmond said he was also concerned “crucially” about the organisation’s storage of data because it “has access to data of tens of thousands of individuals in the United Kingdom and beyond”.

Raising the issue in the Dáil the Government TD said the group had received numerous fines in the UK “for its campaigning activity, storage of data and funding”.

He claimed it “has associations with quite dubious characters, inside and outside the organisation, which merit serious concern.

“The group is connected, directly and indirectly, with some of the scary events that unfolded in Washington DC last week and this should not be dismissed out of hand.”

He also claimed the organisation was “politically subversive” and “if allowed to gain a foothold in our democracy, would have a detrimental effect”.

Speaking for Mr O’Brien Minister of State Anne Rabbitte said the Government is reviewing current electoral law “and the conduct of politics in Ireland to ensure donations and resources from non-citizens outside the State are not being utilised to influence our elections and political process”.

The Government plans to establish an electoral commission, which the Minister said would contribute to such a review.