Surge in freight traffic on direct ferry routes to Europe 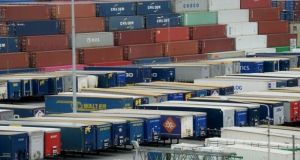 Rosslare Europort reported an almost 500 per cent increase in freight units on ferries to and from France and Spain in the first six sailing days of January. Photograph: Alan Betson

Rosslare Europort, the State’s second busiest lorry freight port, recorded a sixfold increase in freight on direct routes with Europe this week, while traffic on Irish Sea routes has halved.

In a sign of the impact of the new Brexit checks on trade with Britain, the Co Wexford port reported an almost 500 per cent increase in freight units on ferries to and from France and Spain in the first six sailing days of January compared with the same period last year.

There was a 50 per cent decline on freight volumes between Rosslare and Fishguard in Wales as businesses and transport companies avoided the new post-Brexit customs and regulatory controls at the EU-UK border that have delayed supplies, cancelled ferries and led to shortages.

There have been 1,148 freight units carried on 18 direct sailings between Rosslare and Dunkirk and Cherbourg in France with DFDS and Stena and to Bilbao in Spain on Brittany Ferries between January 2nd and 7th compared with 197 units on three services last year.

Some ferries have been booked up as traders avoid Britain to get to and from Europe.

Glenn Carr, general manager of Iarnród Éireann-owned Rosslare Europort, said there had been a “phenomenal response” to the new direct services between Ireland and continental Europe.

“We are seeing the switch from supply chains on the UK landbridge to mainland Europe. The benefits have been seen with a number of key supply chains that have been able to ensure their stock has been delivered into the country because they switched to direct services,” he said.

Major supermarket retail chains such as the German discounters Lidl and Aldi and Irish chain SuperValu are using direct routes, while UK retailers such as Tesco and Marks & Spencer have struggled to move stock through supply chains from distribution networks in Britain to Ireland.

Mr Carr said he expected to see a further increase in capacity over the next seven to 10 days on direct routes with Europe. He said Rosslare Europort was speaking to other shipping lines about setting up new direct services given the level of interest in avoiding Brexit checks through Britain.

“The UK will not apply their full suite of checks until July. The challenges with the landbridge will only be seen when all the checks are required on both sides,” he said.

Firms have struggled to cope with new customs, regulatory and food sanitation checks on imports from the UK, resulting in lorries being denied onto ferries and goods stuck in Britain.

There were food shortages at Marks & Spencer’s Irish stores as the UK retailer said that about a third of food products it sells in the State may be complicated by new post-Brexit trade rules.

The Revenue Commissioners relaxed customs procedures for importers on Thursday night to “get goods moving” given the growing number of trucks in Britain waiting to move trailers.

Industry groups have called for a further relaxation of Revenue’s border control procedures and criticised its new three-tier customs IT system with Eugene Drennan, president of the Irish Road Haulage Association, describing the procedures as “too cumbersome and too slow”.

Customs agent and goods transporter Owen Cooke, chairman of logistics group Independent Express and the Pallet Network storage, said that the system was new and had not been given time to debug or to be tested.

“It is just chaotic. The whole economy is being brought to a standstill on this and they are insisting that there is nothing wrong with the system,” he said.

“Brexit should have caused a problem for Britain but all it is doing is closing down the Irish economy.”

The Revenue said that its systems were “operating fully and correctly” and that “without exception” every system-related query that it has investigated “was a user error rather than a system error”.

Revenue said that traders were finding it difficult to compile or complete the required customs declarations “because, in some instances at least, the Brexit preparation messages reiterated by Revenue over at least the last two years, unfortunately for the businesses concerned, went unheeded”.