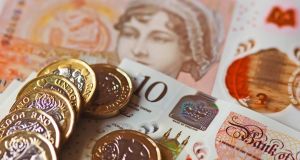 The pound had strengthened after a last-minute Brexit deal was agreed on December 24th, which set rules for industries such as fishing and agriculture. Photograph: iStock

The pound weakened versus the euro on Britain’s first day of trading outside the European Union, but strengthened against a softer dollar, climbing above $1.37 for the first time since May 2018, as traders weighed up Brexit relief with Covid-19 risks.

The pound had strengthened after a last-minute Brexit deal was agreed on December 24th, which set rules for industries such as fishing and agriculture.

Although the deal does not cover Britain’s finance sector, UK market participants were relieved by an extension which allows them to use platforms in the European Union for swaps trading until March 2021 - a move announced on Thursday in a bid to avoid disruption.

Versus the weaker dollar, the pound was up 0.2 per cent at $1.3682, having briefly crossed the $1.37 level for the first time since May 2018 early in the European session. The pound gained 2.5 per cent overall against the dollar in December.

Commerzbank’s head of FX and commodity research, Ulrich Leuchtmann, said that sterling’s recovery after the Brexit deal was agreed was “disappointingly limited”, but that it has further scope for gains in the next few days as traders adjust their positioning upon their return from holiday.

Mr Leuchtmann was less bullish on sterling’s longer-term outlook, however.

“For market participants with a long-term outlook the concern that Brexit might constitute the beginning of renewed economic decline in the UK is more likely to dominate,” he said.

Sterling-dollar implied volatility gauges with one-month and three-month maturities, which spiked in December and then fell when the Brexit deal was agreed, have edged up again in the past few days, suggesting traders still expect price swings.

In bad news for sterling, Covid-19 cases in Britain are at record levels. Prime minister Boris Johnson said on Sunday that tougher lockdown restrictions were probably on the way.

RBC Capital Markets analysts wrote in a note to clients that negative interest rates are likely to remain a possibility for the UK because, although a chaotic no-deal Brexit has been avoided, rising Covid-19 infections will have an impact on the Bank of England’s outlook for the economy.

Market participants are pricing in negative rates in the UK by May 2021. - Reuters