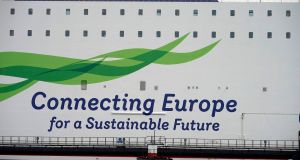 The Stena Embla will be able to take about 50 more lorries than the Stena Horizon. Photograph: Christopher Furlong/Getty Images

Stena Line is moving a larger, new ship to a direct Ireland-France route from a planned route between Britain and Northern Ireland as more businesses seek to avoid Brexit checks.

The shipping company is adding the Stena Embla to the Rosslare-Cherbourg service from Thursday to meet increased demand from firms avoiding Irish Sea ports and border controls.

The ship was originally planned to operate on the Belfast-Liverpool route but new post-Brexit border controls, customs and regulatory on goods being moved between Britain and the island of Ireland has forced businesses to rely more heavily on direct services between Ireland and France.

Increased bureaucracy around customs and regulatory checks has forced Irish companies to avoid the British “landbridge” route, traditionally the fastest and cheapest way to and from mainland Europe, and to look to transport goods on the direct ferries with mainland Europe.

The number of ferry services running between Rosslare, the closest port to mainland Europe, and the continent has more than quadrupled on last year to meet the post-Brexit demand.

The Stena Embla will be able to take about 50 more lorries than the Stena Horizon, which now services the route, increasing freight capacity by 40 per cent and adding 60 per cent more cabins.

The new Stena ship, which will sail for the first time on the route on Thursday evening when it departs Rosslare, will be able to carry almost 190 lorries, 120 cars and 1,000 passengers.

“Clearly, Brexit has created an increase in demand for direct freight routes, and in particular driver-accompanied freight.

The new ship is the third “E-Flexer ferry” commissioned by Stena Line, the largest shipping operator servicing the island of Ireland, for Irish Sea routes in a €400 million investment.

Danish shipping line DFDS has said that ferries have been booked-out on its Rosslare-Dunkirk ferries and it has encountered problems with over-bookings and lorries being turned away from ships as it prioritises the transport of critical medicines and medical equipment avoiding Britain.

In another move reflecting softer post-Brexit demand on Irish-British routes, Irish Ferries has taken its Epsilon ship off the Dublin-Holyhead route, cancelling eight sailings due to lower freight volumes on the Irish Sea as a result of post-Brexit border controls.

A spokesman for the company would not comment on the cancelled sailings or on the company’s plans for new services between Ireland and France, only saying that “our flexible operations will allow us to monitor the market and adjust quickly to match demand as required.”

Irish Continental Group, the shipping line’s owner, is still running one ferry, the Ulysses, on the Irish Sea route.

This week, it moved the WB Yeats ferry to the Dublin-Cherbourg route three months earlier than planned due to the demand for direct services with mainland Europe.