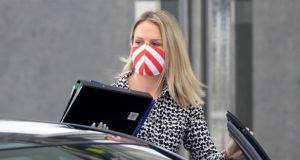 Minister for Justice Helen McEntee said that it was “very concerning” that there was “still a way to go” to reach a deal between the EU and UK. Photograph: Alan Betson

The Government may need to negotiate a “fallback” bilateral agreement with the United Kingdom on data sharing to protect cross-Border policing post-Brexit, Minister for Justice Helen McEntee has said.

Ms McEntee told the Oireachtas justice committee that one of the biggest concerns after the UK’s exit from the European Union comes into effect on January 1st was the continued co-operation and sharing of intelligence between the Garda Siochána and the Police Service of Northern Ireland.

The Minister said data sharing between the police forces is covered by EU and Irish law but in the absence of a post-Brexit EU-UK deal, the “fallback option” was to create and retain records of all data transferred under a bilateral agreement between the UK and Ireland.

“It is not the direction that we want to go. Obviously we would prefer that there was an agreement on an EU-wide basis but that is something that we would have to look at given the huge level of co-operation that has happened between the Garda and the PSNI,” she said.

Ms McEntee said that it was “very concerning” that there was “still a way to go” to reach a deal between the EU and UK. She was discussing the Brexit Omnibus Bill that the Government intends to enact before the end of the year to be ready for the possibility of a no-deal scenario.

Ms McEntee said that if no trade deal is agreed between the EU and the UK, the Government will need to fall back on legal conventions on extradition, immigration and family law that “won’t enable us to work as seamlessly as we currently have” with the UK under EU arrangements.

“Brexit means change and we have always said that even with an agreement in place but certainly without an agreement particularly when it comes to the area of law, particularly if we are falling back on conventions that maybe don’t allow us to work with the same ease as we do now,” she said.

Ms McEntee also said that the State would “find ourselves in a very challenging situation” if the UK were to breach international law and an international agreement, in the Brexit withdrawal deal, by implementing the Internal Market Bill to remove checks between Northern Ireland and Britain.

She said that the Northern Ireland protocol with the withdrawal agreement requires additional checks on the Irish Sea “to ensure the integrity of the [EU] single market.”

“It’s unfortunately not legislation that I’m working on within our department but it’s something that we would have to look at,” said the Minister.