State contribution to EU ‘a steal’ for what it gets back, says Varadkar 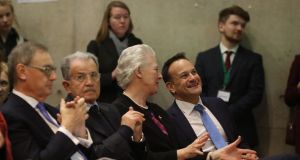 Taoiseach Leo Varadkar has called the State’s financial contribution to the European Union “a steal” and “really cheap” compared to what the country gets back from the bloc.

Opening a conference on the future of Europe in Dublin, Mr Varadkar said the EU should not be defined by Brexit like it is defining the United Kingdom “for a generation or more”.

The UK’s exit showed the EU can work together to solve “the most intractable of problems”, he said.

In a strongly pro-EU address to an audience at Trinity College Dublin, the Taoiseach said the EU budget was required to confront “transnational challenges” and that contributions to it were “a small price to pay for the enormous intangible benefits from what we gain from the EU”.

Mr Varadkar said he attended last month’s EU Council negotiations on a new seven-year EU budget representing Ireland as a net contributor to the budget in those talks for the first time.

“I vowed to myself that whatever role in politics I may have in the future, it is to avoid us ever getting into that idea that this is a simple accounting exercise,” he said.

Mr Varadkar spoke of the importance of informing voters about the value of being in the EU and the “delta” between what countries contribute and what they receive.

“It is a steal, it is really cheap if you think about what we get back from the European Union for the amount that we contribute,” he said.

The Taoiseach opened the conference hosted by the College Historical Society debating society and pro-EU think tank the Institute of International and European Affairs, as part of events to mark the 250th anniversary of the “Hist”.

Mr Varadkar warned about the rise of populism, saying the EU needed to “be better at presenting and defending what we do, otherwise our narrative is shaped by others”.

The EU had to become better “at presenting the real news”, he said, a thinly veiled reference to foreign countries that spread disinformation online to undermine the EU and other institutions.

Mr Varadkar cautioned against western Europe turning their backs on eastern European states such as Macedonia and Albania, warning they and their youth “may well turn elsewhere”, particularly to “non-European forces” who were keen to exploit them and “are doing so already”.

Europe needed a “new project” and a “new raison d’être” for young people who have no memory of the “horrors of world war and the evils of fascism and communism”, he said.

In a panel discussion entitled Moving Beyond Brexit, former European Commission president and Italian prime minister Romano Prodi called for urgent concrete action to reform the EU if it is to preserve any possibility of having influence in the future.

“Brexit has not made Europe disappear but I cannot forget that half of the world was looking at the European Union with British glasses, in India and Africa, ” he said.

The UK’s exit has left France as the only country with nuclear weapons, said Mr Prodi. He called on France to “put nuclear armaments towards Europe” to make the EU more powerful in the face of a rising Russia and China and a widening divide with the United States.

Former European Council president and Belgian prime minister Herman van Rompuy said the EU was a “global actor” but “not a world power”. There needed to be stronger military co-operation and integration to allow the EU to “play a bigger role in our neighbourhood”, he said.

The former EU chief said the bloc had survived all the “existential crises” that it faced in the past 12 years – the financial and euro-zone crisis, the immigration crisis and Brexit – and at the heart of them all was “more and more lack of solidarity”.

“You don’t have to love Europe; you have to simply recognise that we cannot live without Europe,” he said.