Simon Hoare: ‘I hope UK and Ireland have not gone past the point of no return’

British politicians must remind ourselves daily, of the miracle of the Good Friday Agreement 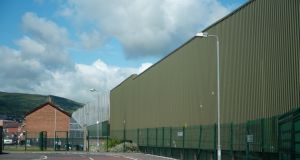 One of the so-called peace walls in Belfast.

For far too many in Great Britain, the island of Ireland and the delicate political balances of intra-North and UK-Republic relationships can best be summed up by Neville Chamberlain’s phrase of 1938 “A far away country of which we know little”.

As a Conservative MP and chairman of the House of Commons Northern Ireland Affairs Committee, I continue to be amazed by the lack of knowledge or interest in, the political and social affairs of both a part of the UK – the North – and also of our near neighbour – the Republic. Perhaps it is the fear of offending either one tradition or the other precludes engagement.

For others there is a feeling that devolution is up and running, the Good Friday Agreement is in place – job done we can let them get on with things. Nothing could be further from the truth.

I am afraid that there are also some who can never quite reconcile themselves to the fact that the Republic is an independent country and not only independent but a modern, outward looking, liberal European state. Others believe the Republic may wish to join the Commonwealth as some sort of stepping stone to leaving the EU. Even a casual perusal of Irish politics and public discourse would show this for the nonsense it is.

It is self-evident that it is in our joint strategic and national interests that the friendliest relations exist between our two countries. The tripartite approach of the New Decade, New Approach deal, as announced in January, rightly identifies the need for collaboration between Westminster, Stormont and Dublin on many areas that affect citizens of both countries on a daily basis.

The challenges of delivering Brexit within the only part of the UK enjoying a land border with the EU single market that the UK is about to leave makes this even more necessary.

I am genuinely worried that the unilateral tone adopted by the UK government on how to deal with certain legacy issues coupled to the relationship-straining Internal Markets Bill (as it relates to the NI protocol) has cleaved Anglo-Irish relations at a time when co-operation is critical. I hope we have not gone past the point of no return but it is going to take energy and proactivity to mend the fences.

Another aspect of the lack of engaged interest in the affairs of Northern Ireland within the wider UK is the surprise to some that violence is still all too common a feature, that punishment beatings, protection rackets and cross-Border smuggling continue.

Allied to this, as an increasing number of my fellow citizens across Northern Ireland no longer identify with one of the “traditions”, it is perhaps not surprising that those who do, are becoming more muscular and strident in their tone.

A significant proportion of smuggling proceeds fills the coffers of the men of violence. It is for this reason that Brexit must be delivered with a keen eye on the all-Ireland peace impact. To maintain the sanctity of the Good Friday Agreement, whatever Brexit solution was alighted upon, would always have a knock-on effect. The challenge remains to minimise it.

Now is the time to focus on ensuring mutual understanding, respect and interest in both our histories

My take is that the east-west protocol is the “peace solution”. The protocol provides that Northern Ireland is legally part of the UK customs territory but subject to certain provisions of EU law. It is hard to envisage physical attacks being made on its infrastructure or its policing while the reverse is true and any physical infrastructure would become a target for those who wish to destabilise the Jenga-like peace.

The nationalist “grey beards” may claim (as their predecessors did) that violence has no part to play in the North. They are right but the young hot heads do not agree, as the recent arrests, following laudable cross-Border intelligence sharing, of Operation Arbacia – the Police Service of Northern Ireland investigation into the New IRA – confirm.

To alight on the post-Brexit east-west protocol option is not perfect; it creates costs that must be light touch and cost-neutral as far as business is concerned. I know that for many, and many I call friends, it is seen as another nibbling away at the union and giving ground to avoid the resurrection of violent nationalism. I understand their concern but, I remain to be convinced that peoples define their national sense of belonging by the customs arrangements that brought them their breakfast cereal. The sense of nationhood is too strong and compelling for that.

We must remind ourselves, daily, of the miracle that is the Good Friday Agreement. Out of blood, hatred and mistrust, people, implacably opposed to each, came together and alighted upon something that allowed peace to take root.

There is still a lot of work to do to see it grow to maturity. A lot of goodwill, give and take and mature reflection is required. But for those of us who remember, in real time, terrorist attacks at Brighton, Harrods, Warrington, Manchester, Warrenpoint, Enniskillen and the Baltic Exchange, can we honestly say that we believed anything like the Good Friday Agreement could or would be delivered and sustained?

That the years of mistrust would turn to ones of co-operation? That is why we cannot just celebrate it but must proactively protect it. Now is the time to focus on ensuring mutual understanding, respect and interest in both our histories and our futures. We are at a crossroads. Let’s pray we take the right turn.

Simon Hoare is chairman of the House of Commons Northern Ireland Affairs Committee. An edited version of this article first appeared in The House Magazine.