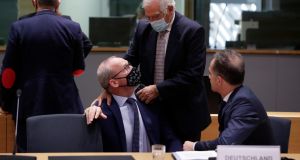 An amendment to Britain’s internal markets bill that would require parliament to sign off on measures that would violate the Brexit withdrawal agreement is insufficient to quell the concerns of the European Union, Minister for Foreign Affairs Simon Coveney has said.

“I think the British government has acted to try to appease concerns in the Conservative Party,” Mr Coveney told reporters after meeting with his 26 EU counterparts on Monday.

“Accepting an amendment which effectively puts a parliamentary lock on acting on the elements of the legislation that undermine an international treaty has gone some way to calm the divisions within the Conservative party. I don’t think it’s impressed the European Union.”

The UK Internal Market Bill, which gives British ministers the power to override parts of the withdrawal agreement and the Northern Ireland protocol that was agreed to avoid a border across the island of Ireland last year, cleared the first hurdle in the House of Commons last week.

Amid international criticism and concerns among some Conservative MPs, prime minister Boris Johnson agreed to an amendment off the bill put forward by the Conservative chairman of the justice committee, Bob Neill, which would give MPs the power to block such action by ministers.

Nevertheless this is insufficient to quell the EU’s concerns, Mr Coveney said.

“A government with an 80 seat majority having a parliamentary lock, I’m not sure that is a reassurance to anybody outside of the UK,” Mr Coveney said.

“It doesn’t unfortunately move us away from the threat of the United Kingdom to breach international law, to break a Treaty that they themselves designed and signed, less than 12 months ago and I think that is very regrettable because I think that makes solving what is already a complex serious of problems even more difficult for the two negotiating teams.”

“This has been very damaging to Britain’s reputation and to the prime minister’s reputation outside the UK,” he added.

A deal is still possible in the “next six weeks”, he told reporters, and the EU is focused on achieving one. The member states are due to further discuss the matter on Tuesday, and it will be raised as an information point when the national leaders meet in Brussels on Thursday.