Sector grew for fourth month in row, the longest sequence of continuous gains since 2010 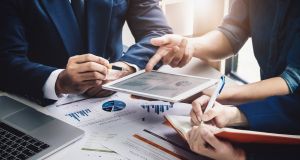 Output in the State’s services sector grew at the fastest rate in February for more than two years as the sector rebounds after the Brexit uncertainty of 2019, data from AIB shows.

The AIB Services PMI (purchasing managers index), an economic indicator which details responses to questions among a panel of services companies, rose to 59.9 in February from 56.9 in January.

Any figure above 50 indicates expansion and the headline number has risen for four months in a row, the longest sequence of continuous gains since the first half of 2010 when the sector was emerging from the global financial crisis.

The sector fell to a seven-year low, and close to contraction, in October when the outcome of Brexit negotiations was particularly uncertain. Since then, services companies have quickly rebounded.

“Total new orders gained further momentum in February, rising at their fastest pace since April 2018. Most notably, new exports orders, which had weakened a lot in 2019, have picked up considerable strength in the past couple of months,” he said.

Looking forward, it’s unclear as to whether strength in the sector will be repeated for the rest of this year. The 12-month outlook in the sector moderated from January’s peak but sentiment was still stronger than much of 2019.

“This reflected uncertainty related to the inconclusive general election, the post-transition Brexit settlement and potential disruption to the global economy from the Covid-19 outbreak,” AIB said.

The PMI is compiled by IHS Markit from responses to questions sent to a panel of about 400 companies in the sector.